Helipad continues to save lives

The helipad at King’s College Hospital NHS Foundation Trust continues to support staff in saving the lives of patients, one year after its launch on 26 October 2016.

On Tuesday 17 October emergency staff at King’s College Hospital NHS Foundation Trust successfully saved the life of Tom Locke after he fell from the roof of his three story home, thanks to the Trust’s rapid helipad. 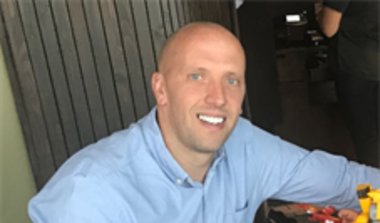 As a result of his fall Tom fractured every bone in his face, as well as sustaining an open femoral fracture, a fractured wrist and forearm, a dislocated elbow and severe haemorrhaging. Tom’s partner Lydia Clark called 999 and the decision was made to send an air ambulance, which arrived around 20 minutes later. Tom was intubated at the scene, and arrived on the helipad at King’s College Hospital around 25 minutes later (half the time of a conventional ambulance).

Following stabilisation in the Emergency Department Tom was moved to the Intensive Care Unit and the next day had his femur fixed, wrist set and was given a tracheostomy so he could be woken up. He has since undergone 10 hours of facial reconstruction and is making a good recovery.

Tom’s story is a prime example of ‘Time is Life’ – the campaign we launched to raise money to build the helipad – as it demonstrates the importance of getting critically injured patients into King's Trauma Centre and receiving specialist care as soon as possible. We receive some of the most seriously injured patients in the south east, and the helipad means that these patients are now receiving equity of access to the care they urgently require despite the distances involved, thanks to the helipad and air ambulance service.

The helipad has already saved lives, helping the hospital serve its trauma population of 4.5 million people across south east London and Kent. In the last year alone 162 patients have been brought to King’s College Hospital by air ambulance.

Since its opening the helipad has had a massive impact, significantly decreasing the time it takes to transfer patients from the scene of an accident by helicopter to the Emergency Department. Before the helipad opened helicopters landed in nearby Ruskin Park and patients were transferred to the Emergency Department by road – adding a further 25 minutes to the patient’s journey, time that is now being saved.

The King’s Health Partners Orthopaedics, Trauma and Plastics Clinical Academic Group is driving excellence across its specialities and is one of the largest plastic surgery departments in the UK.