Neurosurgeon named Clinician of the Year

Professor Keyoumars Ashkan, Professor of Neurosurgery at King’s College Hospital NHS Foundation Trust, has been named UK Clinician of the Year by The Brain Tumour Charity. 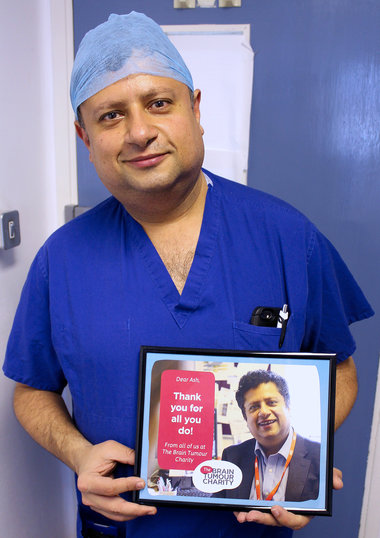 Professor Ashkan is lead surgeon for brain cancer at King’s College Hospital NHS Foundation Trust, and was honoured for his work with brain tumour patients. The award recognised his contribution to improving patients’ quality of life and his research in finding new therapies.

The award recognises clinicians who have shown an exceptional level of commitment in supporting the charity’s work, and have gone above and beyond to advance brain tumour treatments. The judging panel comprised patients, their relatives and charity representatives who collectively voted for a winner.

Professor Ashkan has made contributions to a number of large-scale national clinical trials including the GALA BIDD and GALA5 trials, which used fluorescence (the emission of light) to diagnose brain cancer and guide tumour removal respectively. He was also lead clinician for a trial that used immunotherapy to treat brain cancer, and is currently working on trials investigating the imaging of tumours and radiotherapy for meningioma (tumours that form on membrane covering the brain and spinal cord).

It is an honour and true privilege to win this award as it is judged and decided by patients, carers, charities and public - all the people we work hard to serve.

As a European Comprehensive Cancer Centre, the King's Health Partners Cancer Clinical Academic Group brings together world-class clinical services, research and education for the benefit of cancer patients in south east London and beyond.