As the Dental Institute at King’s College London enters the 20th year anniversary of its formation, an extensive academic review has led to the development of an ambitious strategic plan with a vision to be world leading in dental, oral and craniofacial education, research and clinical care by 2023. 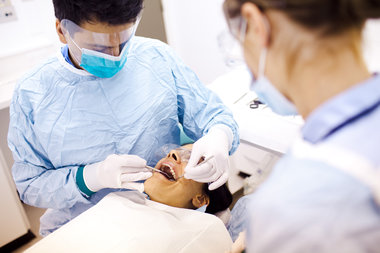 In the latter part of 1998, a merger brought together the United Medical and Dental School of Guy’s and St Thomas’ with King’s College Hospital School of Medicine and Dentistry under King’s College London. This merger resulted in the formation of the King’s Dental Institute. Over the last 20 years the growth and success of the Institute have provided the sound foundations to move forward with this new strategic plan.

To realise this vision the faculty have announced they will reorganise their internal structures to best support their ambitions in education, research, international affairs, service to society and the London agenda as described in
King’s Strategic Vision 2029.

Through this reorganisation a new name was proposed to recognise the breadth and depth of the education and research portfolios which now are undertaken within the Institute beyond the term Dental.  The new name, the Faculty of Dentistry, Oral & Craniofacial Sciences (FoDOCS), was agreed to reflect this broader academic profile and will take effect from early 2019.

The name Dental Institute will continue to be used to represent the partnerships with the NHS Trusts as part of King’s Health Partners, thereby incorporating both University staff and students as well as NHS staff of the associated dental hospitals at Guy’s and St Thomas’ and King’s College Hospital.

To support the Faculty of Dentistry, Oral & Craniofacial Sciences in achieving their ambitions, a new leadership team has been established.

Professor Michael Escudier was recently appointed to the newly created position of Deputy Executive Dean of the Faculty of Dentistry, Oral & Craniofacial Sciences. Professor Escudier is the current Dean for the Dental Faculty at the Royal College of Surgeons London and has played an important role in the leadership of the Dental Institute over the last few years and is currently serving as interim Dean for Education.

Professor Kim Piper was recently announced as Dean for Education for the Faculty of Dentistry, Oral & Craniofacial Sciences. Professor Piper is currently Head of Admissions and Widening Participation for Medicine and Dentistry at Queen Mary University of London, and Professor of Oral Pathology.  She brings with her a considerable amount of leadership experience and an impressive track record in education and widening participation working across Medicine and Dentistry. Professor Piper joins the faculty early 2019.

Professor Abigail Tucker was recently appointed as Dean for Research. Principal Investigator and Professor of Development & Evolution, Professor Tucker holds a Wellcome Senior Investigator award to study the middle ear. She is heavily involved in public engagement and outreach with a particular focus on encouraging young women into STEMM research.

Professor Nigel Pitts was announced as the Academic Lead for Impact at the Faculty of Dentistry, Oral & Craniofacial Sciences. Professor Pitts has served as Director of the Innovation and Translation Centre for the Dental Institute, he is the leader of the Global Collaboratory for Caries Management initiative and chair of the Alliance for Cavity Free Future.

The faculty distinguishes itself by its unique research portfolio in dental, oral and craniofacial sciences, embracing blue skies discovery research in addition to translational and clinical sciences. The research will focus on three key pillars which will link with each other, the wider health sciences at King’s, and with external partnerships.

The three themes identified are:

To support these themes and our educational portfolio, four new Centres have been created, each led by a Head of Centre:

Professor Paul Sharpe graduated with a degree in biology from York University and a PhD in biochemistry from Sheffield University. Following postdocs in Sheffield, Wisconsin and Cambridge he became lecturer in molecular embryology at the University of Manchester. In 1991 he was recruited to his present Chair at the Dental Institute of Guy’s Hospital (later to merge with King's College London), where he established a new basic research department, the Department of Craniofacial Development and Stem Cell Biology. From 2002-2008 he was Director of Research for the Dental Institute.

Professor Gordon Proctor received his PhD in Biomedical Sciences from the University of Sheffield. Professor Proctor was previously appointed as a Professor of Salivary Biology in 2006, having been a Reader in Secretory Biology, University of London from 1998 to 2005. Professor Proctor has been President of the International Association of Dental Research Salivary Research Group and he is Editor-in-Chief of the journal Archives of Oral Biology.

Professor David Bartlett is Head of Prosthodontics and Graduate training. Professor Bartlett has published over 140 research publications, written 3 books, numerous chapters, and is internationally known for his research on erosive tooth wear. He was awarded the IADR distinguished scientist award in Prosthodontics for 2017 and is a member of the Academy of Prosthodontics.

Given the importance of the International agenda to the five year plan, the faculty are also strengthening the international leadership team.

Professor Jeremy Green has been appointed as Vice Dean International (Research). Principal Investigator and Professor of Developmental Biology, Professor Green obtained his PhD at Imperial and completed postdoctoral work at MBL, Darmstadt and NIMR Mill Hill. After a Miller Fellowship at UC Berkeley, Professor Green started his own group at Harvard Medical School. He returned to the UK in 2005 to join King’s College London’s Department of Craniofacial Development and Stem Cell Biology.

The newly appointed team will support Professor Mike Curtis and Ms Joanne Kirner who joined the faculty in 2017 as Executive Dean and Faculty Operating Officer respectively.

Professor Curtis is a distinguished microbiologist with a robust track record of academic leadership. Professor Curtis’ current research is focused on the role of the oral microbiome in maintaining oral health and developing disease, and key microbial virulence determinants of oral bacteria.

Ms Joanne Kirner joined the faculty on 1 November 2017 and brought to King’s her strong experience of strategic and operational planning alongside her ability to manage complex interdependencies and external relationships, including with NHS Trusts. As Faculty Operating Officer, Ms Kirner’s role is key to embedding a cross-university end-to-end professional services delivery model that enables world-class education and research.

Inaugural lectures will be held for the new leadership team, with the first of the series featuring Professor Gallagher on Thursday 22 November.  More information on this event can be found here.