Young Dentist of the Year

Dr George Cheetham attributes his recent win of the Best Young Dentist in London award to the experience and skillset he gained from the King’s College London’s Aesthetic Dentistry MSc. 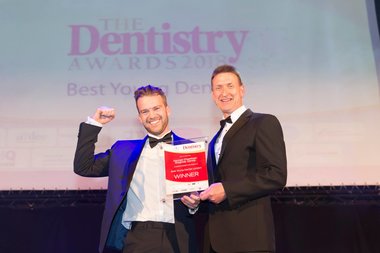 The Senior Partner at Ridgway Dental in Wimbledon completed the course at King’s Faculty of Dentistry, Oral & Craniofacial Sciences in 2014. His colleague suggested he enter the Dentistry Awards. To give him the edge to pip the competition he used a number of cases he worked on during his masters in the nomination.

George [pictured on the left receiving his award] chose the King’s College London MSc as he wanted to ‘up his game’ in the field of aesthetics and restorative care. He explains:

The course gave me the skillset to now work full time in my own private practice where I focus on aesthetic restorative dentistry, in a multi-disciplinary setting. The course has really opened my eyes into what was achievable in dentistry. Over the three years my academic knowledge was vastly improved, and my clinical skillset was incomparable at the end of the course.

And the course has given me the knowledge and clinical confidence to take on cases that I wouldn’t have previously.

George enjoyed the course so much that he’s gone on to do some part time teaching of his own. Working with King’s College London, Dr Cheetham helps teach with Aligntech on the topic of Invisalign. He also runs a course aimed at improving the skills of the general dental associates at Northwick Park Hospital.

The Dentistry Awards has been going for more than 10 years and is the most-entered and best-attended awards scheme in UK dentistry. The Young Dentist London category is highly coveted and previously has been won by dentists who have gone on to do great things in the profession. To win the award, the applicants must demonstrate hard work, show excellent clinical results, significant academic achievement and give a little back.

The King’s Health Partners Dental Clinical Academic Group provides dental care for more than 300,000 patients each year at more than 30 sites across London.