E-cigarette use plateaus among British smokers

An independent report, led by researchers at the National Addiction Centre at the Institute of Psychiatry, Psychology & Neuroscience (IoPPN) and commissioned by Public Health England (PHE), finds regular e-cigarette use among British adults has plateaued. 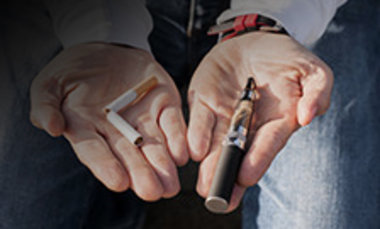 Just over a third of adult smokers have never tried one and only 4% of quit attempts made through Stop Smoking Services use an e-cigarette, despite this being an effective approach.

The report is the first in a new set of three commissioned by PHE under the Government’s Tobacco Control Plan for England. It looks specifically at use of e-cigarettes rather than health impacts, which will be the subject of a future report.

Regular e-cigarette use among adults remains largely confined to smokers and ex-smokers, with quitting smoking the main motivation for adult vapers. The report found 5-6% of adults use e-cigarettes and less than 1% of people who have never smoked.

Smoking rates among adults continue to fall with just under 15% of adults in England smoking, according to government figures. The report recommends that Stop Smoking Services should do more to encourage smokers that want to quit with the help of an e-cigarette.

We are encouraged that regular vaping among young people in Britain who have never smoked remains low. However, we need to stay vigilant and in particular closely monitor youth smoking. With just over a third of adult smokers having never tried an e-cigarette, there is a clear opportunity for more smokers to try a method which has helped many others to quit. Smokers should be advised to stop smoking as soon as possible and explore all available options for support, including e-cigarettes.

We could accelerate the decline in smoking if more smokers switched completely to vaping. Recent new evidence clearly shows using an e-cigarette with Stop Smoking Service support can double your chances of quitting. But with e-cigarettes currently used so rarely in services, it’s time for change. Every Stop Smoking Service must start talking much more about the potential of vaping to help smokers quit. If you smoke, switching to vaping could save you years of ill health, and even your life.

More information can be found in Vaping in England: an evidence update February 2019.

The King’s Health Partners Addictions Clinical Academic Group are one of the largest providers of NHS addictions services in the UK.