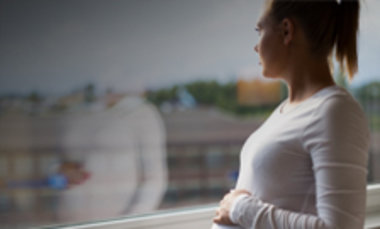 The study, funded by the National Institute for Health Research (NIHR), found anxiety disorders, in particular social phobia, were especially high. By comparison, the study suggests roughly one in five (21%) pregnant women in London aged 25 years and above have mental health problems.

Researchers from Institute of Psychiatry, Psychology & Neuroscience (IoPPN) recruited 575 women through their first antenatal appointment with an inner-city London maternity service. Of this group, 57 women were aged between 16 and 24.

All women were interviewed using a psychiatric gold standard diagnostic interview to determine if they met the criteria for one or more mental health condition. The researchers also recorded information about their socio-demographic background, such as ethnicity, educational level and employment status.

According to the research, published in BJPsych Open, pregnant women under age 25 were also more likely to be non-white, single, living in poverty, homeless or living in emergency accommodation, unemployed, or have an unplanned pregnancy.

The rate of lifetime abuse was high (38.9%), with rates of sexual abuse at 20.6% and partner abuse at 19.5%. The researchers note that this is probably an under-estimate, as abuse is often under-reported. Experience of abuse and living alone were both risk factors for mental health problems in this group.

We’ve shown a shockingly high prevalence of mental disorders in young pregnant women aged 16 to 24 years in London compared with women aged 25 years or older. We found that, in comparison to previous research focused primarily on postnatal depression, young women experience a broad range of mental disorders during early pregnancy, with anxiety disorders being particularly prevalent.

The researchers particularly highlight that the high risk for mental disorders is not limited to pregnant teenagers, as suggested by previous research, but remains high for women in their early 20s.

The researchers say that more could be done to target perinatal mental health services at women aged under 25. This aligns with the recent NHS Long Term Plan and NHS Five Year Plan to ensure that by 2023/24 at least 54,000 more women each year can access evidence-based specialist mental health care during the perinatal period.

Our vision is to bring together and build on the extensive strengths of King’s Health Partners to create an Institute of Women’s and Children’s Health that will improve outcomes for women and children in our local area, nationally and internationally