King's College Hospital NHS Foundation Trust has become the first Major Trauma Centre in London to be granted permission for air ambulances to land at night as well as during daylight hours. 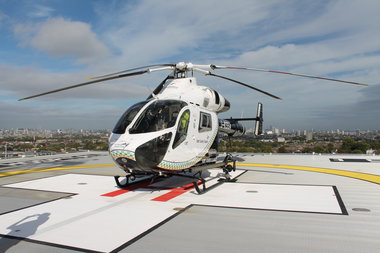 The new development will ensure patients receive the same level of timely care 24 hours a day, seven days a week.

Since it opened in October 2016, the helipad has been operational between 7am and 9pm. Any trauma patients requiring specialist treatment and care outside of these hours have been brought to King's College Hospital NHS Foundation Trust via road ambulance.

Following engagement with local residents and Lambeth Council, King’s College Hospital are now permitted to run the service round the clock. This could save up to 90 minutes in transfer time for patients on the Kent coast.

The operational costs for the extended service will be covered by Air Ambulance Kent, Surrey and Sussex.

This is a significant move forward and fantastic news for the patients we serve. People requiring trauma care in Kent and Medway will now have the same access to highly specialised, timely treatment as those in London, which can be the difference between life and death.

We have carefully tracked patient numbers since the helipad opened more than two years ago and we anticipate up to two-night time landings per week as a result of this development. These are patients whose transfer to King’s may have taken up to two hours previously.

A precise date for the helipad to be operational 24/7 will be confirmed in due course.