The Cicely Saunders Institute of Palliative Care based at King’s College London is taking part in a new international study seeking to deliver a step change in the evidence-based treatment of severe breathlessness among people affected by respiratory diseases, especially chronic obstructive pulmonary disease (COPD) and interstitial lung disease (ILD). 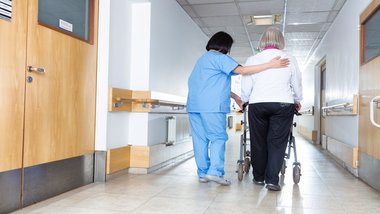 Breathlessness is a debilitating and frightening symptom that currently effects an estimated 15 million people in Europe, with this figure set to increase in the future.

First, it surveys doctors about their current practice and how they are using existing guidelines. Second it trials a new medicine for people who are severely affected by breathlessness and chronic respiratory diseases across five countries. Third, it launches a new website with the latest information on treatments for those affected by breathlessness and for doctors, nurses, physiotherapists and others caring for people affected by these conditions. Fourth, at the end of the programme, it will produce a new European position statement for respiratory and palliative care specialists on breathlessness management.

With my illness, breathlessness is the main and most problematic symptom for me. My mother also had suffered from breathlessness – she had terminal cancer. And my 90-year-old uncle now currently suffers from it – he has asbestos on the lungs. It is such a debilitating symptom and has a huge impact on quality of life. Anything to reduce the impact of this symptom would have been a great help to me and my family.

Other reviews did not find benefits for benzodiazepine drugs, even though these are commonly used.

Breathlessness is a persistent yet often ignored symptom, and the BETTER-B team hope the testing of mirtazapine can establish whether or not it will be another treatment option for those with COPD or ILD suffering from its debilitating effects.

However, when these don’t work anymore and breathlessness gets worse, then there are too few options. In BETTER-B we want first to provide better information on what we already know does and doesn’t work, so that everyone can get the best from what we know now. At the same time we will test the new medicine. We have some preliminary evidence that this medicine, which is an antidepressant called mirtazapine, may relieve breathlessness, even when people are not depressed. But now we need evidence from a properly conducted clinical trial.

With support from Marie Curie in the UK the team have already found that the trial they propose is feasible. Mirtazapine is a widely used antidepressant, which is inexpensive. It is already also used to relieve some types of pain. Some small studies have suggested it may help breathlessness even though the person affected is not depressed. The trial will robustly measure the effects of mirtazapine treatment and the costs to health and social care.

This programme will add to our growing body of knowledge with the ultimate aim of relieving suffering and improving the quality of life for those with this distressing symptom, and their friends, family and carers.