A person with deep vein thrombosis has been successfully treated with a revolutionary new clot-removing device at Guy’s and St Thomas’ NHS Foundation Trust. 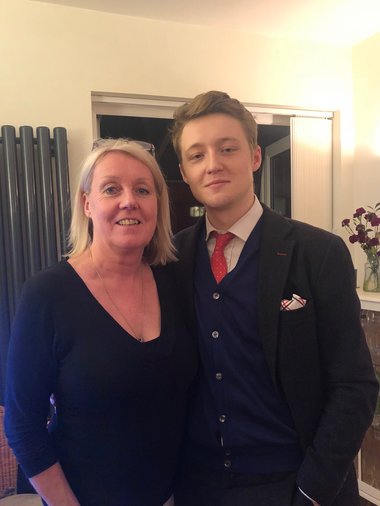 Jackie Field, was the first patient in the world to receive the experimental treatment. Surgeons treated her to remove a blood clot in her leg, which had developed after she had surgery.

Jackie is taking part in the Venous Thrombus Extraction (VETEX) study to test the safety of the Vetex Thrombectomy Catheter. The new technology is the first to use rotating and grasping action to remove large blood clots from the vein, without the use of clot-busting drugs. It could be used to treat people with extensive deep vein thrombosis in the leg – where the clot has gone all the way up to the abdomen.

Deep vein thrombosis is a blood clot that forms in a vein deep within the body, usually the leg. It affects around 620,000 people per year with 25,000 deaths. Researchers have been trying to find the best way to remove these clots, with treatments ranging from blood thinners and compression socks, to drugs which break up blood clots.

The new treatment has the potential to be safer and faster than these standard approaches, enabling surgeons to remove the clot in one visit and get patients walking again more quickly.

Jackie was first admitted to Woolwich Hospital with an internal tear in her abdomen in November 2018 and underwent treatment to repair it. A few weeks post-surgery, and after returning home, she developed a clot in her leg and was transferred to St Thomas’ Hospital. Because she had previously had internal bleeding, drugs to break up the clot or thin her blood could not be used. Her surgeon, Mr Stephen Black, suggested taking part in the clinical trial of the new device.

Jackie was the perfect patient to trial this technique, partly because she met the requirements for the surgery, and no other treatment option was appropriate in her case, but also because of her attitude. She was very calm about it, and keen to take part.

The potential consequences of leaving deep vein thrombosis in the leg rather than removing it are very bad for patients. They can go on to develop post-thrombotic syndrome which is a long-term condition that can cause severe pain, mobility problems and, in some cases, ulceration. For patients like Jackie who can’t be treated with conventional techniques involving drugs, it’s vital to have another treatment option. 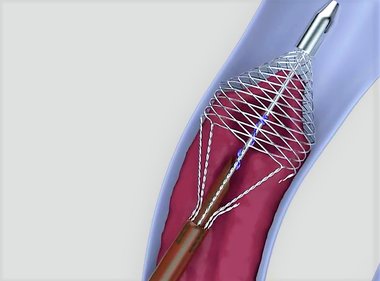 The Vetex device [pictured right] has two parts - an extraction screw within a basket. It works by opening to the exact size of the vein where the clot is, collecting up the clot and compressing it. The basket grabs onto and removes the entire clot from the wall of the vein, while the screw helps pull the clot out of the body.

The VETEX trial is running at Guy’s and St Thomas’ NHS Foundation Trust. The device will be trialled with more patients, and assuming it is proven to be safe and effective, it could become available to patients as a standard treatment in a few years’ time.