A seven-year-old girl who was born with a rare form of deafness and never expected to speak can now tell her parents that she loves them thanks to pioneering brain surgery led by King’s Health Partners surgeons. 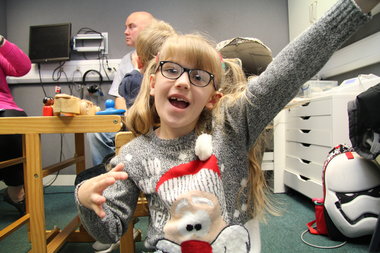 Leia Armitage [pictured] was born without her cochlea and auditory nerve in both ears meaning she was profoundly deaf and could not benefit from even the most advanced hearing aids.

Her parents were told that she would only be able to communicate through British Sign Language.

Professor Dan Jiang, one of the surgeons involved in Leia’s operation and head of the Hearing Implant Centre at Guy’s and St Thomas’ NHS Foundation Trust, said:

Once the ABI has been activated, it can take years for children to learn to interpret the sound but, over time and with the support of audiology and speech therapists, Leia has been able to develop both her speech and sign language. Our whole team is very proud of the progress she has made.

It was a huge decision for us because it involved complex brain surgery, but we decided to go for it because it was Leia’s only chance of ever hearing sound and we wanted to give her the best opportunity in life.

Our expectations were never that high based on the experiences of a few other children around the world. We hoped that she would be able to hear environmental sounds, such as a car beeping its horn as she crossed the road, to make her safer in the world.

We were devastated when we found out Leia was missing her auditory nerve as well as her cochlea. We thought we had no hope as her deafness was so rare, but thanks to the ABI we’ve come so far.

It’s taken over five years to get to this point and a lot of rehab but Leia has defied the odds and is now putting full sentences together and has a wider vocabulary. There’s nothing better than hearing her say ‘I love you daddy’.

It’s been hard work and required a lot of determination from Leia, but in the last six months we’ve seen an increase in her using her voice. When I’m putting her to bed she now says ‘good night mummy’, which is something I never expected to hear.

An ABI has two parts – an external ‘processor’ worn behind the ear and the surgically implanted internal part.

A microphone on the processor picks up the sound around it and turns it from a sound wave into an electrical signal. The processor then transmits the sound signal to the internal part of the hearing implant.

This means that the implant is bypassing both the cochlea and the hearing nerve, taking a short cut to the brainstem to produce a sensation of sound.

Leia’s implant was activated on her second birthday and she continues to receive support from the speech and language therapists at Guy’s and St Thomas’ NHS Foundation Trust.