A two-year-old has become the youngest child in the world to undergo deep brain stimulation to treat severe, uncontrolled and painful muscle movements, thanks to a cross-partner team from Evelina London and King’s College Hospital NHS Foundation Trust. 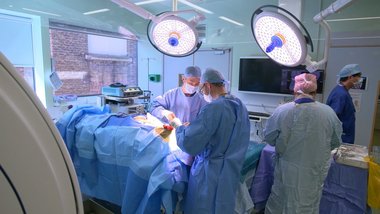 Viktoria Kaftanikaite, two, has had deep brain stimulation (DBS) at Evelina London [pictured right], becoming the youngest child in the world to have this procedure. Viktoria, from Glasgow, suffers from a condition called ‘dystonia’, which causes uncontrolled muscular movements or spasms.

Dystonia can be caused by inherited genetic problems, cerebral palsy or other brain injuries. At its worst, the condition prevented Viktoria from eating and affected her breathing, meaning she spent five months in the paediatric intensive care unit in her home city of Glasgow. She was eventually diagnosed with a rare mutation in the GNAO1 gene and was referred to neurologists at Evelina London who recommended DBS.

Viktoria’s uncontrolled and violent movement meant she was in real pain which is extremely upsetting for her parents.

Deep brain stimulation has been proven in adults and older children to change the course of these conditions, often very dramatically. But the challenge was to deliver this in much younger children.

With this procedure, we’ve created real momentum to begin to explore how children respond to this surgical process. This opens the possibility that by identifying the condition faster and operating earlier, we could reduce the impact of dystonia and improve development.

DBS involves electrodes being implanted into the deep areas of the brain that control movement. The electrodes connect to a pacemaker under the skin of the abdomen. Viktoria’s operation, which used state-of-the-art robotic and intraoperative imaging equipment, took four and a half hours. At the time she was two years and eight months old. The operation has previously been performed on older children at King’s College Hospital jointly with Evelina London’s paediatric neurology team. The two teams work collaboratively together, sharing expertise.

I am so happy for my daughter and I hope the stimulation works. Our lives have been so hard with her in so much pain, especially for her, so this is a chance that she can live a good and happy life.

With the permission of Vikoria's parents, a film of the operation was premiered at the European Academy of Neurology 5th congress in Oslo earlier this month by the European Paediatric Neurology Society, which provides vital training and scientific research in paediatric neurology.

Viktoria is the youngest child that we’ve operated on and, as far as we know, the youngest in the world for this procedure. This opens up a whole series of difficulties with the surgery and these are simple things that we don’t need to think about in adult neurology. Questions such as does the adult-sized equipment work with someone so small? Is the child’s skull thick enough? Will the implant fit inside the body?

Also as Viktoria grows, the electrodes won’t be in the ideal place. We’ve set it up in advance so that, with the minimum of effort in the future, we can optimise the positioning of the electrodes. The equipment is developing and as the manufacturers get used to the fact that we are dealing with younger and younger children, so the devices will follow.

This is an excellent example of partnership working for the benefit of our patients.