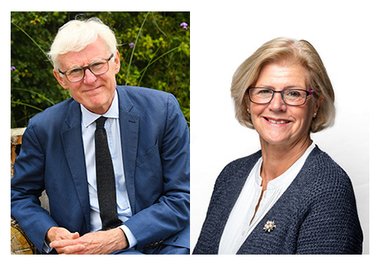 Sir Norman is a long-standing and active campaigner for mental health. He has worked to challenge stigma around mental health and ensure people with mental health issues are treated with the same priority as those with physical health needs.

Sir Norman was Health Minister from 2012-2015, where he introduced the first access and waiting time standards in mental health care for the treatment of depression and anxiety, and for patients experiencing a first episode of psychosis. Prior to this, he was a Minister in the Department for Business, Innovation and Skills.

In 2019, Sir Norman received a knighthood in the Queen’s Birthday Honours for his public and political service, notably for his contribution to mental health.

Helen is Chair at Recovery Focus, a national partnership of charities operating to provide mental health and substance misuse support. Helen is a board member and trustee of Peabody Housing Trust and Social Finance and was previously a Non-Executive Director at Central and North West London NHS Foundation Trust and a Trustee of Lloyds Bank Foundation.

From 2013 to 2016, Helen was the Deputy Permanent Secretary/Director General of Local Government and Public Services. Her previous roles also include Acting Permanent Secretary at the Ministry of Justice, CEO of National Offender Manager Management Services at the Home Office and Chief Executive at NACRO, the national crime reduction agency, where she received a CBE for her services to offenders. In 2012, Helen was awarded the honour of Companion of the Order of the Bath for her contribution in the field of Justice and Offender Management.

I am thrilled to have been appointed as Chair of the South London and Maudsley NHS Foundation Trust. This is a fantastic opportunity to play a part in improving the lives of those who experience mental ill health. This is my passion.

I am so grateful for the trust that the Governors have shown in me. I am really looking forward to meeting staff at all levels, those involved in brilliant world class research and those with lived experience and their families. I want to get to know the Trust and the people who commit their working lives to supporting others.

I am delighted to be joining the Trust as a Non-Executive Director. I have a long-standing commitment to improve mental health services and so am pleased to be able to join such a well-regarded organisation. I look forward to playing a part in helping the Trust to achieve its mission and deliver its ambitious plans for the future.