Experts at Guy’s and St Thomas’ NHS Foundation Trust have implanted three leadless heart devices in one patient in a world first. 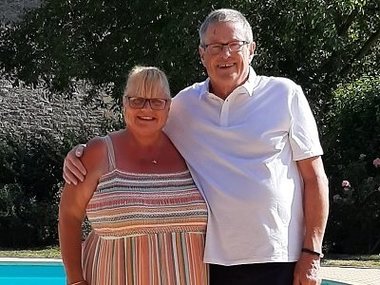 Robert Brind [pictured right], 63 from Whitstable in Kent, has heart failure caused by a heart attack which left him with severe damage and scarring to his heart. He needs a pacemaker, a cardiac resynchronisation (CRT) device and a subcutaneous implantable cardioverter defibrillator (S-ICD) to keep his heart working well.

After suffering from infections due to the leads in conventional pacemakers, the cardiology team at St Thomas’ Hospital realised that Robert’s best option was to have purely wireless systems fitted instead, to keep his heart healthy and prevent a cardiac arrest, while minimising the risk of infection. The wireless forms of the three devices had never been used in one patient before and were implanted in Robert over six months, with the last one being fitted in January.

In August 2019 the leadless Micra pacemaker, which uses electrical pulses to prompt the heart to beat at a normal rate, was inserted in the right side of Robert’s heart. In October the tiny wireless WiSE-CRT system, which works with the pacemaker to ensure both sides of the heart are beating in unison and improves the heart’s pumping function, was fitted in the left side of his heart.

At the end of January this year the leadless S-ICD was placed under the skin on the left side of Robert’s chest in front of his heart. It acts as a safety net, monitoring the heart and delivering a shock if it detects a dangerous heart rhythm, restoring a normal heart rhythm and preventing cardiac arrest.

I was told I would be the first person in the world to have all three of these wireless devices implanted in my heart. I’m a glass half full type of person so I wanted to go for it if it could help me and push the boundaries of what’s possible.

There’s no doubt this combination is working better than any devices I’ve had before. I’m more active, breathing better and able to do things I haven’t been able to do for a long time. I feel back to my old self before the heart attack now.

I’m very grateful to be the first person in the world to have this and if one day it could all be done at once that would be amazing. The care I received at St Thomas’ was absolutely outstanding – the team is wonderful and I’ve had great follow-up care too. I’ve been exceptionally well treated.