Professor Ghulam Mufti is to retire from his roles as King’s College London’s Head of Department of Haematological Medicine; Non-Executive Director and board roles at King’s College Hospital NHS Foundation Trust; his board role for Viapath and his position as Haematology Institute Director (Academic lead) for King’s Health Partners Academic Health Sciences Centre (AHSC). 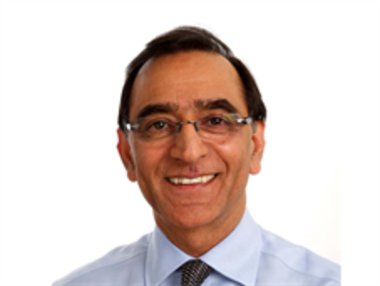 Professor Ghulam Mufti, a world-renowned driving force for the research, diagnosis and treatment of blood cancers, has announced that he will be retiring from his roles as Head of King’s College London’s Department of Haematological Medicine and the Haematology Institute Director (Academic lead) for King’s Health Partners on the 7th September 2020, to continue his research and clinical practice.

A pioneer who radically changed the way blood cancers were treated at King’s College Hospital NHS Foundation Trust and across the world, Prof Mufti has dedicated 35 years of his career to his clinical work and research. As the head of haemato-oncology at King’s College Hospital his team in collaboration with the Institute of Liver Studies carried out the first ever combined liver and bone marrow transplant at King’s in 1985. With his leadership, the hospital now has one of the largest bone marrow transplant programmes in the UK and performs over 200 transplants a year.

Working with leukaemia charities including Leukaemia UK and Blood Cancer UK, Prof Mufti tirelessly pressed for enormous expansions to the services and resources of his department, transforming it from one which initially had two in-patient beds to one with 60 and creating four new specialist haematology wards including the Derek Mitchell ward.

Over time he grew his department – which originally had no research laboratories - to house 180 researchers and a new dedicated research facility for finding game-changing new treatments. As a result, his department went on to become an international and renowned centre for the diagnosis and treatment of blood cancers.

It is a centre of excellence for Leukaemia Lymphoma Research and the only gene and cell-based therapies centre for myeloid leukaemia and allied diseases. It is also a national centre for several haematological disorders such as aplastic anaemia or thalassaemia, and an Exemplar Centre for clotting disorders and sickle cell disease. Under Prof Mufti’s oversight as Pathology Director, the department was the largest pathology hub in the UK and the first to have a single track for pathology.

King’s College London has confirmed that it will begin a worldwide search for Prof Mufti’s successor.

Prof Mufti has devoted much of his time to roles across King’s Health Partner organisations, which he will now be retiring from, including:

Over the course of Prof Mufti’s distinguished career with King’s and King’s Health Partners he has driven many significant and impactful clinical achievements, changing the lives of many patients across London and beyond. His specialist work in myelodysplastic syndrome, acute myeloid leukaemia and stem cell transplantation has helped to transform the detection and treatment of many cancer cells resulting in improvements in the diagnosis, treatment and life expectancy of people with leukaemia.

Some of his achievements include (a more extensive biography is beneath this notice):

Prof Mufti’s contribution to blood cancer research and treatments is unparalleled, and his work will have a lasting impact on the lives of so many of our patients across the country. We have been extremely fortunate to have had his expertise and leadership in our Haematology Institute, and his support was instrumental for our Mind and Body team to offer whole body care to those with blood cancer. All of us at King’s Health Partners wish him the very best as he continues his research and clinical practice.

We will all be sorry to see Prof Mufti retire from his many roles, yet his commitment and enthusiasm has impacted on so many staff across the King’s College community together with the broader King’s Health Partnership. We are as a consequence so well placed to build on his legacy and thrive. Prof Mufti’s research across a number of areas of haematology not least in leukaemia and MDS, has advanced the science base but also led to significant advancement in clinical practice, including the development of guidelines that have improved outcomes from disease for patients across the world. I personally wish him much gratitude and wish for his continued success, as Ghulam charts this next and exciting new chapter in his career.

Prof Mufti has been a part of history for haematology, particularly at King’s College Hospital. He performed our first combined liver and bone marrow transplant in 1985, and since then our department has gone from strength to strength with his incredible expertise and passion. His services to haematological medicine are unrivalled and have helped so many of our patients and staff at King’s. All of our staff join me in wishing him the very best as he continues his research and clinical practice.

In addition to all his other exceptional achievements, Prof Mufti has made an outstanding contribution to the Board of King’s College Hospital for nearly 8 years. He has been a powerful advocate of King’s role as a centre of academic excellence, a champion of the staff at King’s and in particular of our black and minority ethnic staff across the organisation, and above all as a strong and challenging voice for the patients and communities we are proud to serve. We will very much miss his contribution when he steps down from the Board later this year.

Prof Mufti will now continue to focus on his Celgene programme research, fundraising and his clinical practice.

Key roles as an Examiner: