The majority of the UK’s population now resides in cities and at least 40.2% of London residents identify as being of either Asian, Black, Mixed or other ethnic groups. 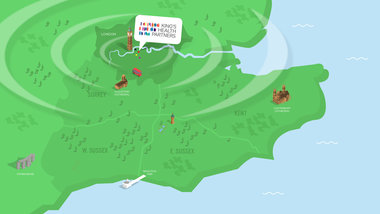 On 14 April 2021 hundreds of staff, students and key healthcare stakeholders joined our online Clinical Academic Workshop on urban population health. Its aim was to start a conversation on the health inequalities and challenges we face in south east London and beyond, and what we can do as a collective to improve urban population health.

Below you can read our eight learnings from the workshop on the theme:

1. Understanding the urban population health agenda is not a new concept.

Prof Majid Ezzati, Chair in Global Environmental Health, Imperial College London, reminded us that more than 100 years ago, way back in 1917, Charles V. Chapin, a pioneer in public health research, was cited taking about population health – clearly demonstrating how urban population health is not a new topic for healthcare.

Prof Kevin Fenton, Regional Director, Public Health England London and Regional Director of Public Health, London, also highlighted a more recent history - that the 2010 World Health Organisation/United Nations Habitat global report is just one of many publications that highlights the importance of city health. A key message from this report is it showed, for the first time in history, the majority of the world’s population live in urban areas, and that number continues to grow.

2. We need to focus on the disparities in health shown according to ethnicity, sex, deprivation and age.

Prof Kevin Fenton challenged attendees that “health inequalities are avoidable and unfair differences in health status between groups of people or communities.”

Therefore, to understand our urban population health agenda, we need to get to grips with the health inequalities exacerbated by ethnicity, age, sex, deprivation and geography – as well as considering the intersectionality between these factors.

Another key point to highlight in this area is that there is no health without mental health. Dr Jayati Das-Munshi, senior lecturer in social and psychiatric epidemiology, Institute of Psychiatry, Psychology and Neurosciences (IoPPN) at King’s College London and Honorary Consultant Psychiatrist at South London and Maudlsey NHS Foundation Trust shared statistics on patients with serious mental illness, such as:

(i) A 15–20-year reduction of life expectancy in people with severe mental illnesses relative to the general population:

3. COVID-19 has had a deeply unequal impact.

Prof Kevin Fenton revealed how the COVID-19 pandemic has taught us a lot more about health inequalities. He said:

If you entered the pandemic not understanding health inequalities, there is no way you will leave this pandemic, or move into this phase of rebuilding, without a deep passion and concern for healthcare policies.

Talking about COVID-19 disparities in risks and outcomes, there are a number of stark reminders including:

4. Anchor organisations have a lot of potential to benefit local areas.

5. Our communities know their needs and often have the answers.

Despite anchor organisations showing a lot of potential, we learnt at the workshop that we need to better connect with our communities to address what matters to them.

Sir Norman Lamb, Chair, South London and Maudsley NHS Foundation Trust, shared there’s a disconnect between academia and the communities we serve. He emphasised how we all need to listen, collaborate and recognise that there is a race dimension in terms of mental health.

There are of course, clear solutions to tackling health inequalities, some of which we are already championing at King’s Health Partners. Dr Jayati Das-Munshi shared the possibility of local data being used to highlight inequalities and that we may be able to use data to empower local communities. Dr Ingrid Wolfe, Director of King’s Health Partners Institute of Women and Children's Health, shared her team’s ambitious plans to use data to deliver better health. Data requires recording measurements from the health system and its individuals, services, population and research studies (also known as data inputs). How we then use this data is the second vital aspect of improving healthcare, such as through personalising care, continuous quality improvement, targeted delivery and research studies. She said:

We need a well-functioning system that responds in a balanced way to a population’s needs, improving the health status of people and populations, along with identifying and proactively defending the population.

Much of Prof Majid Ezzati’s presentation was focused on cities as unequal opportunities for good health. During the panel discussion, he drew out an interesting comparison on ‘delivering’ healthcare. He said:

8. London has ambitious plans to become the healthiest global city.

There is hope for building back a fairer, safer city coming out of the COVID-19 pandemic.

Prof Kevin Fenton shared “the London Vision” – aiming to be “the world’s healthiest global city, and the best global city in which to receive health and care services.” The London Vision sets out a commitment to “accelerate integrated working to deliver a new approach to population health improvement’, noting that the ‘building blocks’ should be the boroughs (and the neighbourhoods within them), and recognising that the formal statutory sector would be more effective if it could support and rely on the community groups and anchor organisations to work in partnership.”

A huge thank you from all of us at King’s Health Partners and to the host of speakers who gave up their extremely limited time to share their views and experiences of how we can make progress to improve urban population health.

Liked this article? Sign up to receive regular updates on population health from King’s Health Partners and Our Healthier South East London and join our next Clinical Academic Innovation workshop on system-wide quality improvement and outcomes on 9 June – sign up here.