A distinguished university leader and academic, Prof Kapur [pictured below] comes to King’s College London from the University of Melbourne, where he spent four years as Dean and Assistant Vice Chancellor (Health) for the Faculty of Medicine, Dentistry and Health Scipences and interim Deputy Vice Chancellor (International). 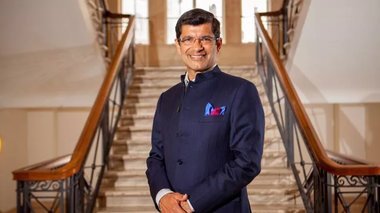 It is my great honour to serve King’s College London as President and Principal and to return to a university I am so passionate about; in a city I love; amongst students and staff I admire.

King’s College London is a place of talent, excellence, creativity and resilience that has for nearly two centuries been defined by a spirit of service to society. I firmly believe there has never been a better time for universities to redefine their place in the world by supporting a global recovery from COVID-19 in way that leads to a better world for all.

Thank you for welcoming me back into the King’s family. I am energised by the opportunities ahead and look forward to leading King’s as we generate knowledge with purpose and support our students to become the critical thinkers and global actors the world needs.

An international and strategic leader, Prof Kapur is an architect of world-class education and research, who strongly shares the ethos of service to society that is central to King's College London’s vision.

During his time in Melbourne, Prof Kapur significantly increased the educational footprint of the Faculty of Medicine, Dentistry and Health Sciences, introducing innovative models of learning, increasing both research income and impact, while doubling philanthropic support. In collaboration with colleagues across the university and medical research Institutes he was involved in creating the Centre for the Digital Transformation of Health and establishing the Aikenhead Centre for Medical Discovery. He Co-Chaired the Australian Million Minds Mission and during the Covid pandemic took a lead role in bringing together scholars from the Group of Eight Universities to deliver the ‘Roadmap to Recovery – a Report for the Nation’.

Prof Kapur is recognised worldwide for his own research on understanding psychosis and antipsychotic treatment – with more than 300 papers, numerous presentations and an H-index of more than 100. While at King’s College London he led NEWMEDS, an international consortium of scientists from 19 institutions from nine EU countries, which was one of the largest academic-industry research collaboration projects in its time.