The South East London Cancer Alliance (SELCA) is rolling out a campaign to tackle the decline in lung cancer referrals. 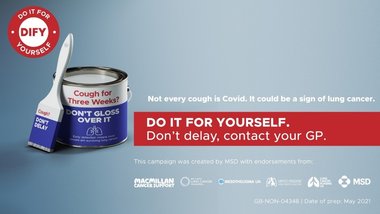 A new campaign has launched this week across south east London, embracing a DIY theme to encourage Londoners to not dismiss a cough of three weeks or more as being COVID-19 and to see their GP to be checked out for lung cancer.

Lung cancer is one of the most common cancers in the UK. Early symptoms typically include a persistent cough lasting for more than three weeks, breathlessness and weight loss – which are sometimes dismissed or confused for other conditions.

Over the course of the COVID-19 pandemic, there has been a growing evidence that the cough symptom crossover between COVID-19 and lung cancer has led to a rapid in a decline in referrals.

The ‘Do it For Yourself’ campaign seeks to address this issue by raising awareness of lung cancer symptoms and the fact that not every cough is COVID-19, while reassuring people that their GPs are available and ready to see them safely.

Lung cancer can affect people of all ages, but the risk increases as you get older. The campaign is therefore specifically targeted at men and women over the age of 50, as lung cancer most commonly affects people of this age group. It makes it vital that this age group specifically is aware of what symptoms they should be looking out for.

Advertising will be across south east London, including on phone booths, buses, beer mats, and digital signage in large supermarkets.

The first phase of the “Do It For Yourself” campaign ran in November-December 2020 in collaboration with the Greater Manchester and Northern Cancer Alliances. It was developed and funded (through design and advertising costs) by MSD alongside the lung cancer community including Roy Castle Lung Cancer Foundation, Mesothelioma UK, Lung Cancer Nursing UK and UK Lung Cancer Coalition.

SELCA is now one of seven Cancer Alliances across England hosting the second phase of the campaign. Cancer Alliances bring together a range of local organisations – including NHS bodies, local government, charities, and patient groups – with shared goals of:

SELCA works across primary care networks, the Integrated Care System, and the three acute south east London Hospital Trusts – Guy's and St Thomas’, King’s College Hospital, and Lewisham and Greenwich – to ensure patients get access to the best possible and joined-up care either in hospital or closer to home.

In addition to the symptom of a cough for three weeks or more lung cancer can also present the following symptoms:

The NHS is open and has adapted operations to be able to see patients safely.

Have you seen a “Do It For Yourself” poster in situ? Tweet a picture to @NHS_SELCA.