To mark World AIDS Day on 1st December, the National Institute for Health Research (NIHR) Clinical Research Network (CRN) South London looked back at the milestones of the past 40 years and spoke about how ongoing research may benefit people with HIV in the future. 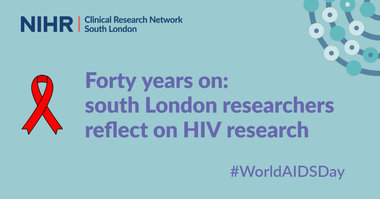 Dr Fox’s professional interest in HIV dates back from her university years in the early 90s when HIV was a great concern and many people were dying.

As a junior doctor, she became interested in the varied aspects of HIV, the basic science, the ways to develop a cure or a vaccine as well as the sexual behaviour and the psychology around HIV.

HIV had a special history in that people affected by the disease led the drive for research to happen. It was against political drive, but affected groups were so motivated, and set up the activism movement so strongly that funding was finally pushed towards HIV. With that motivation to take part in studies, the development of HIV drugs was probably one of the most rapid in any field of medicine.

A look back at HIV research

Taking a retrospective look at the milestones of medical research into HIV, Dr Fox explains:

The first turning point was to get an accurate test for diagnosis. The second was to develop antiretroviral therapy. That went through a process of evaluating one drug which worked but not for very long, then two drugs that worked for a bit longer.

Finally, triple drug therapy was adopted that has been in use for the last 15 years. This has meant that most people diagnosed with HIV and taking ART well can expect a normal life expectancy.

The third achievement was the fact that if you are on antiretroviral treatment with an undetectable viral load, you are not infectious and cannot pass HIV on. This finding has massively reduced onward transmission of HIV and as a consequence greatly reduced the stigma around HIV.

The challenge of finding a cure

For all these landmarks, there is a long way to go. We are yet to find a vaccine or a cure, so more research is still required. Asked about the challenge of developing a cure, Dr Fox explains:

HIV is very clever. After it infects a cell, it hides and falls asleep, so the immune system doesn’t even realise it’s there. It goes to many areas of tissue that are hard to reach for the immune system. Also, there are multiple strains of HIV in your body, which is why neither a preventative nor therapeutic vaccine has been successful to date.

However, new therapies have been trialled and are coming along. The RIO Trial is pioneering globally.

The trial is a collaboration between Imperial College London, University of Oxford and Rockefeller University and is funded by the Bill and Melinda Gates Foundation. It is led by CRN North West London and supported by CRN South London.

The RIO Trial is the first major study of its kind, which could lead to the development of new treatments that will improve the lives of people living with HIV. We're testing two types of broadly neutralising antibodies (bNAbs), a novel treatment that targets multiple strains of HIV, against a placebo. After receiving bNAbs, antiretroviral treatment is stopped to see how long the virus can be suppressed.

Individuals randomised to the placebo arm of the trial upon viral rebound will be invited to receive open label antibodies to explore how this impacts the size of the HIV reservoir. This means that every study participant will receive antibody treatment.

The RIO trial is now open across seven UK sites in London and Brighton, and any potentially interested participant can self refer or refer through their clinic to the study team. If the trial is successful it could reduce the need for antiretroviral treatment (ART) for six months or even longer.

How has the pandemic impacted people living with HIV?

Another south London researcher, Professor Frank Post at King’s College Hospital, is leading on two studies looking at COVID-19 and Long COVID-19 in people of African ancestry living with HIV. These studies will describe the effects of COVID-19 and the pandemic on people with HIV and HIV care.

The purpose of these studies is to describe the clinical epidemiology and the outcomes of COVID-19 in people of African ancestry with HIV, and to understand their perceptions and concerns about COVID-19, COVID-19 vaccines and other risk-reduction measures.

Urgent Public Health Research Studies are a priority during the pandemic and many research teams and local study approval processes have been impacted, with substantial delays in confirmation of capability and capacity across the multiple study sights. So far, about 300 participants (10% of the target) have been enrolled to date. CRN South London will support research teams with recruitment.

Speaking about the priorities for the professional community and people living with HIV, Dr Fox says that first of all, despite efforts for 20 years, some of the most vulnerable people who aren’t diagnosed yet with HIV are still not being reached and are not on any treatment.

Secondly, it’s to optimise the treatment so that it’s easy to take. New formulations of antiretrovirals are coming. Most exciting are the injectable methods, which can be taken every two to three months removing the need for any tablets.

And finally, cure. It’s a long way off, but if you interview people with HIV, they still want their cure. That area is going to become very exciting in the next five to 10 years of research.

You can find out the latest news and updates about NIHR-supported infection research via the organisation’s website - here.