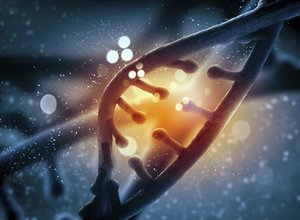 The Prime Minister has pledged to establish the UK as a world leader in genetic research and to transform patient care by unlocking the power of DNA. The national programme will focus on cancer and rare diseases and will enable pioneering research to decode 100,000 human genomes, a scale not seen anywhere else in the world.

A genome is one whole set of a person’s genes, plus all the DNA between the genes. Genomics is the study of the whole genome and how it works, but has also come to have a broader meaning to include the way that the genome is interpreted and the technologies that have been developed because of it.

The three-year project, which began in February 2015, has the potential to transform the future of healthcare. It could improve the prediction and prevention of disease, enable new and more precise diagnostic tests, and allow personalisation of drugs and other treatments to specific genetic variants.

The Genomics Network Alliance grew out of King’s Health Partners Academic Health Sciences Centre and follows a successful pilot project at Guy’s and St Thomas’s NHS Foundation Trust. Serving a population of more than seven million people, it is a partnership between several of London’s leading hospital trusts and universities and two of the country’s biggest patient organisations:

The four trusts will be responsible for recruiting suitable patients and their relatives to the programme, for collecting blood and tumour samples and for extracting the DNA from these samples. Macmillan Cancer Support and Genetic Alliance UK, as well as partners and networks across South London and Kent, Surrey and Sussex will help with patient engagement and communications to the public. The universities will also play a key part in genomic research and education.

To find out more about genomics and the 100k Genomes Project, visit the South London NHS Genomic Medicine Centre website or the  Genomics England website.

The cost of sequencing a human genome has fallen a million fold since the first sequence in 2000 and can now be carried out in a single day. Now is the time to apply whole genome sequencing to healthcare, tightly integrated with research to generate better treatments and a better overall outcome for patients. With the 100,000 genomes project, Genomics England and now the creation of NHS Genome Medicine Centres the UK has the opportunity to lead in the world in the application of genomics medicine.