A Guy’s and St Thomas’ NHS Foundation Trust surgeon has won a prestigious national award for making an outstanding contribution to the treatment of kidney, bladder, prostate and male reproductive problems. 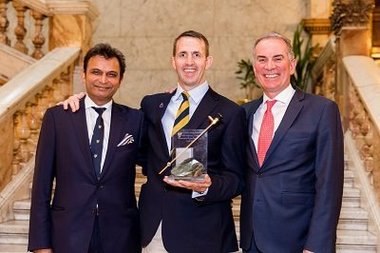 The award is given to clinicians who have made a significant contribution to urology, a medical specialism covering prostate cancer, kidney damage and bladder problems.

Mr Challacombe [pictured with Professor Prokar Dasgupta, left, and Mr Tim O'Brien, right.] was recognised for helping to develop robotic surgery in urology, contributing to consultant mentoring, and his role as the BAUS oncology Chairman.

It’s a huge honour to receive the British Association of Urological Surgeons Golden Telescope award. I’m very thankful to the Trust and the urology department for the support I have received.

I really couldn’t do my job without their continued encouragement and enthusiasm. The Trust has really invested in me and I feel very proud to work for this urology department.

We perform 450 cases of robotic surgery a year at Guy's Hospital as part of our large robotic surgery programme and we consistently strive to provide our patients with the very best care and treatments.

It’s a great testament to the work we do that I am the third consultant from our Trust to have received this prestigious national award.

Ben Challacombe joined Guy's and St Thomas' NHS Foundation Trust in 2010 following his training in Australia. In 2016 he performed the first live robotic partial nephrectomy (partial kidney removal) in the UK. He has performed more than 600 robotic procedures.

The award, which is funded by Karl Storz Endoscopy, is made by the BAUS on the recommendation of a medals and awards committee which includes the President, Vice President, and Honorary Secretary.