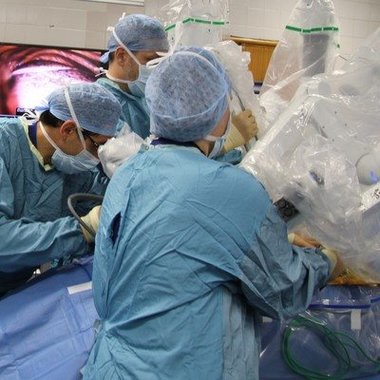 For the first time in the world, surgeons at Guy’s and St Thomas’ and Moorfields Eye Hospital NHS Foundation Trusts undertook the delicate procedure using a robot to successfully remove a tumour next to a patient’s eye. Irene Milton, 85 and a grandmother-of-seven, faced the prospect of losing an eye due to cancer, having a recurrent basal cell carcinoma on the inner corner of her right eye. She said:

I am so pleased at the outcome – I haven’t lost my eye and they got the cancer out. It’s such a relief, I’m over the moon.

It’s nice to know that you’re never too old to have anything done, especially pioneering surgery.

This type of cancer grows slowly and destroys the skin and soft tissues. Such non-melanoma skin cancers are among the most common cancers in the UK, affecting more than 150,000 people a year. Most are small and not serious, but tumours on the eye are rare.

Guy’s and St Thomas’ NHS Foundation Trust has pioneered the use of robotic technology for surgery in the UK. These enable surgeons to perform precise procedures in a minimally invasive way, so patients can recover more quickly. For Irene, from Bedford, it meant surgeons could work in the delicate eye area with enhanced precision and a magnified view to successfully remove her tumour while preserving the nerves and function of her eye.

The team removed the tumour from Irene’s eye during a two-hour operation at Guy’s Hospital, which means she does not need any radiotherapy treatment. Using more conventional methods, she would have lost her eye and had to undergo six months of radiotherapy which would have left her blind.

Over the previous 10 years, Irene had two small tumours on her eye removed but when the cancer recurred this time, she was referred to specialists at Moorfields Eye Hospital who collaborated with Guy’s and St Thomas’ NHS Foundation Trust to develop this new procedure to save her eye.

We’re delighted for Irene that her surgery went so well. Her tumour is gone and she has kept her sight.

It’s the first time in the world that the robot has been used in this way for orbital surgery, and we hope we can treat more patients in the same way. The success of this procedure is testament to the collaboration between our team and our colleagues at Moorfields.

Guy’s and St Thomas’ NHS Foundation Trust already carries out the most robotic operations in the UK with around 1,100 cases a year. The Trust has recently taken the delivery of a new surgical robot to help speed up cancer operations delayed by the pandemic. The new addition brings the total number of robots to four at the Trust and will increase the number of robotic operations to more than 1,400 a year, making it the largest robotic programme in the UK.

During a robotic procedure, surgeons control the robot’s four arms from a console in the same room. They look down a small camera on the end of one arm to see inside the patient and the machine gives them a 3D HD view while they operate, eliminates tremor and provides an increased range of movement.

At Guy’s and St Thomas’ NHS Foundation Trust, robotic surgery is most commonly used for prostate, bladder and kidney removal. The Trust already owns three fourth generation da Vinci surgical systems – based at Guy’s Hospital – and has struck a deal with manufacturer Intuitive to take a fourth on loan for the rest of the year. It will operate on NHS patients from the private floors of the Cancer Centre at Guy’s as part of a collaboration with HCA Healthcare UK. The da Vinci surgical systems are also regularly used by the thoracic lung cancer team as well as the gynaecology, ear, nose and throat and maxillofacial departments.

Taking a robot on loan is a creative solution to the backlog of cancer and other complex operations caused by the pandemic and a real win for our patients.

The benefits of robotic surgery include increased operative precision, leading to less pain, smaller scars and less time in hospital so patients can recover quicker.

We are always looking for new and different ways to deliver the best care and our partnership with Intuitive and HCA Healthcare UK is a perfect example of that.

Interested in finding out more about King’s Health Partners Academic Surgical Grand Round? Join us on 24 June at 5pm to hear experts discuss their latest research and work in breast surgery.