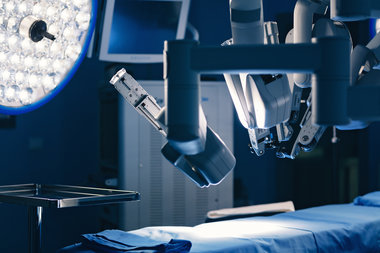 REF is carried out roughly every six to seven years to assess the quality of research across UK universities, show the output and quality of research and show the impact research has on our society. Research England – along with counterparts in Scotland, Wales and Northern Ireland - uses the REF to determine how to allocate approximately £2 billion in research funding.

In the UK, there are about 40,000 men diagnosed with prostate cancer per year. As a solid tumour, current treatments include surgical procedures that remove the prostate in an operation called radical prostatectomy. Keyhole surgery is the ideal mode of operation for patients as the less invasive option which is proven to reduce pain, blood loss and hospital stay when compared to open surgery. But many surgeons struggle with keyhole surgery due to the procedure’s intricacy.

Researchers at KCL, including KHP’s Professor of Surgery Prof Prokar Dasgupta, have been pioneering robotic surgery technology since the beginning of the century. Throughout the last 20 years, KCL has been a leader in the remarkable burst of innovation that has enabled robotic surgery to become the most effective and common method for prostate cancer surgery in the UK.

King’s College London researchers are regarded as pioneers in robotic surgery, a form of keyhole surgery, which has transformed the way operations for prostate cancer are performed in the UK.

Improvements in robotic surgery led by KCL has allowed Guy’s and St Thomas’ NHS Foundation Trust to conduct approximately 1,300 robotic surgeries last year – the most robotic operations in the UK. The majority of these are prostate but also bladder, kidney, and other specialty operations like chest surgery.

The improvements on patient outcome from robotics, and its impact on medical guidelines [NICE and Canadian Agency for Drugs and Technologies in Health) shows the importance of robotic surgery now and in the future. The pioneering research being conducted at KCL and KHP Academic Surgery will undoubtedly continue to improve patient’s lives.

Overactive bladder (OAB) syndrome may not be a term that you have heard of, but you will likely know someone who has it. Over eight million people in the UK experience overactive bladder syndrome. OAB is an umbrella term for numerous bladder and urinary symptoms, stemming from sudden and uncontrolled urges to pee that are so common that they will have a negative impact on your life. Typically, this can result in disrupted sleeping due to waking up to urinate, as well as incontinence from involuntarily leaking urine.

Traditionally, OAB cases that aren’t managed with lifestyle changes or tablets have been treated with reconstructive surgery to increase bladder capacity. But thanks to new scientific research, much of which has been supported and led by researchers from KCL, a Botox-derived therapy for OAB has been pioneered.

Scientists have long understood that the urge for urination in OAB results from C-fibres – the part of the nervous system that transmits an itchy feeling. Researchers from KCL collaborated with the Queen Square Institute of Neurology to study this mechanism in greater detail. They discovered that the receptors P2X3 and TRPV1, which contract the smooth muscle in the bladder wall (known as the detrusor muscles), were overexpressed in patients with OAB. And their overexpression means the bladder constantly contracts, even when it isn’t full, creating the urge to urinate.

It was using this fundamental science that researchers, led by Prof Prokar Dasgupta, were able to popularise the new treatment: BTX-A injections. The 15-minute procedure involves injecting Botox-A directly into the bladder under local anaesthetic using a flexible telescope. Nicknamed the ‘Dasgupta technique’, its first double blind, randomised controlled trial with 34 patients showed that injected patients suffered from fewer problems with incontinence and the urge to urinate. A subsequent extended clinical trial with 300 patients from multiple countries found similar effects were maintained in the long term, scoring up to 90% in Quality of Life and Satisfaction rates.

NICE confirmed its cost-effectiveness in 2019, approving BTX-A as a treatment for lower urinary-tract disorders. The European Association of Urology (EAU) and the American Urological Association (AUA) also updated their guidelines in 2019 to include BTX-A injections. Its international popularity is also being established with the hard work of KCL-based researchers. Prof Dasgupta alone has taught 62 people his eponymous technique, and other researchers have travelled as far as India to teach the BTX-A injection. It’s clear that BTX-A injections have significantly improved the lives of millions of patients, and that the Dasgupta technique will continue to spread through the world.

The surgical community is increasingly concerned about the harmful effects of radiation exposure, on both operator and patient, during X-ray guided procedures. Prof Bijan Modorai, KCL Chair, Vascular Surgery, led a group of researchers who first showed biological evidence of acute DNA damage in lymphocytes isolated from operators performing X-ray guided endovascular intervention and also from interventional cardiologists. The detailed findings were published in Circulation in 2017.

The researchers found that wearing lead leg shielding is essential in nullifying this response. This research has been followed with a three-year study, recently published in Circulation, in collaboration with radiobiologists at UK Health Security Agency and Brunel University, sampling high volume endovascular operators from USA and Europe to show that they also have four-fold higher chronic DNA damage (chromosomal aberrations) compared to surgeons who have not previously been exposed to radiation.

Based partly on these findings and the work the research group have done to raise awareness, the European Society for Vascular Surgery has initiated an expert group, that Prof Modorai chairs, to draft radiation protection guidelines that will be published in September this year.

The next phase of studies, again with UK Health Security Agency, will focus on effects of exposure on patients. In parallel, Prof Modorai will be looking to instigate a large international study that recruits operators, and examines health outcomes and relates these to cytogenetic markers (a structure within a chromosome that is visible by microscopic examination) of DNA damage.

Prof Arnie Purushotham, Director, KHP Comprehensive Cancer Centre, led a study published in Nature, to better understand the rates and routes of spread in breast cancer. Currently, understanding is limited due to the lack of research on patient cohorts with long-term, detailed follow-up. Long-term follow up is especially essential for Estrogen receptor positive (ER+) breast cancer, where tumours continue to recur up to two decades after initial diagnosis and there is a critical need to identify high-risk patients prior to lethal recurrence.

To overcome these limitations, Prof Purushotham and his team developed a statistical framework to model different disease stages and competing risks of breast cancer mortality, successfully enabling predictions for individual risk of relapse. The study identified 11 integrative subtypes of breast cancer which has improved the prediction of late, distant relapse beyond what is possible with using standard clinical characteristics.

Critically, the findings may help determine whether women, who are relapse-free five years after diagnosis, might benefit from extended endocrine therapy or other interventions to improve late outcomes, and potentially paves the way for new treatment strategies for patients at risk of late recurrence.

Beyond this important research, Prof Purushotham and his team also helped design and deliver a clinical trial involving postmenopausal women with breast cancers. The trail found that adding pictilisib (a selective and potent oral inhibitor) to anastrozole (hormone treatment) significantly increases suppression of tumour cell proliferation in luminal B breast cancer. You can find out more here.

Interested in volunteering with KGHP? We are currently looking for a Health Data Management Lead Volunteer and Surgical Lead Volunteer in the Democratic Republic of Congo (remote and in-country placement) to support our Safe Surgery programme. See the Terms of Reference and apply here.