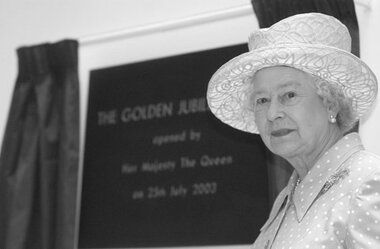 All of us at King’s Health Partners (KHP) were saddened to hear of the death of Queen Elizabeth II on 8 September 2022. Our thoughts are with the royal family and all those affected.

Queen Elizabeth II was a profound advocate of the NHS and Higher Education, with a long history of supporting our partnership organisations. We mourn her passing and celebrate her service and duty as our longest serving monarch.

The testimony of how dear she was held in the hearts of so many members of staff and the public was evident throughout last weekend’s proceedings and the somber observation of her funeral. 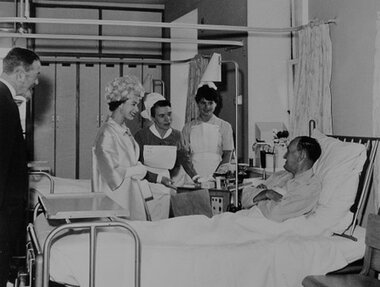 In 1953, Queen Elizabeth II paid her first visit to King’s College Hospital NHS Foundation Trust (NHS FT) as part of the Coronation Tour, meeting both patients and staff. In 1968, she opened the Ruskin Wing, and in July 2003, the Golden Jubilee Wing, where a plaque commemorating the occasion can still be seen today.

The Queen has been a true constant in British life since succeeding King George VI in 1952, and has been our longest serving monarch. As a result, her passing will be difficult for many, many people, including colleagues, patients, and people living in the communities we serve.

The Queen was rightly respected and admired nationally, and internationally, and here at King’s, and our deepest sympathies are with the Royal Family at this time.

As patron of Guy’s and St Thomas’ NHS FT, the Queen visited on numerous occasions. That legacy is continued today by other members of the royal family, including the Princess of Wales who is patron of Evelina London Children’s Hospital. 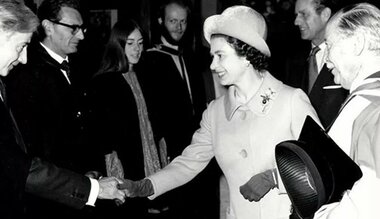 KHP’s history of royal patronage began much earlier. The Royal Bethlem Hospital moved to Beckenham in the 1930s from the site currently held by the Imperial War Museum in Kennington at the behest of Queen Mary. Even further back in 1552, King Edward VI worked with the Bishop of London and the Corporation of London to further develop the St Thomas’ hospital site “for the benefit of lame and the sick”.

As Patron of King’s College London (KCL), the Queen visited the university on many occasions, usually accompanied by her late husband, His Royal Highness, Prince Philip. Prince Philip became a Life Governor of KCL in 1955.

During her 70-year reign, The Queen saw 12 Principals of KCL and officially opened the Strand Building, the Maughan Library, Bush House, and Somerset House East Wing.

If you, your children, or someone you know is feeling upset and sad, South London and Maudsley NHS FT shared the following advice from Cruse Bereavement Support, which aims to help make sense of the feelings of grief and loss. Read it here.