‘Time for change: action not words’

This year the organising team behind October’s Black History Month (BHM) wanted to recognise the achievements and contributions that Black people make to the UK every day. 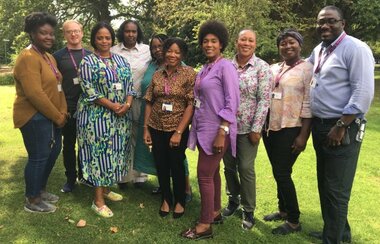 With the 2022 theme of ‘time for change: action not words’, the month is about tackling racism, reclaiming Black history, and ensuring Black history is celebrated all year round.

The partnership marked the month with a series of events, talks, and interviews, which celebrated the continued achievements and contributions of Black staff and students. Here are some highlights from across our partnership: 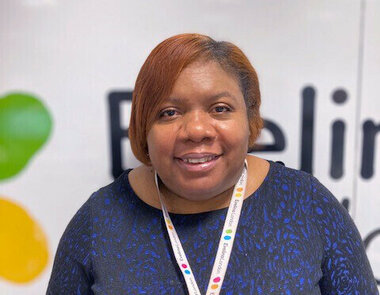 In the first of a series of Trust-wide blogs by staff for BHM, Cavette Castillo, Head of Nursing at Evelina London Children’s Hospital, shared her thoughts and experiences. She said:

Since my appointment, a social media comment from someone I don’t know and have never met still resonates in my ear, ‘grain by grain we break the ceiling’. Whilst the new role was an achievement for me, it became apparent it was also an achievement for my community. 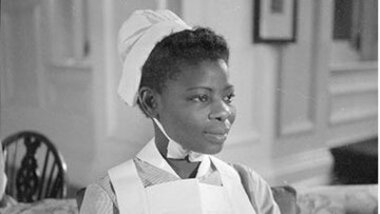 Issue 38 of the GiST featured a fascinating article on Princess Omo-Oba Adenrele Ademola, the daughter of a southern Nigerian King, who trained and worked at Guy’s Hospital in the 1930s and 40s. Read it here.

During October the Trust announced that it has partnered with campaign group Five X to pilot new resources to help reduce the risk of death in childbirth for pregnant Black women.

All patients, no matter their background, deserve to receive the very best care, but we know that Black women can experience racism, discrimination and unconscious bias leading to poor maternal health outcomes. 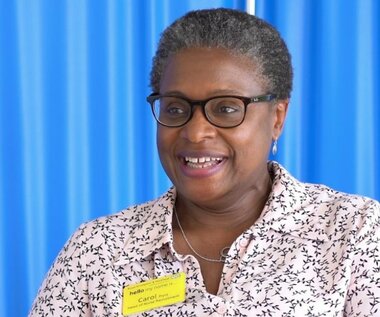 In a blog Carol Pryce, Head of Nurse Recruitment and co-chair of the Trust’s multicultural staff network, explained what BHM means to her, and the importance of allyship and highlighting the influence of Black communities in shaping the NHS. She said:

We need to get more white people saying what steps they have taken or will be taking to fight racism and promote race equality, so that the mic isn’t constantly on Black people to voice what should be done. 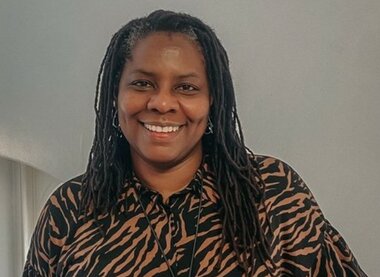 Deputy dental matron Jill Eastmond, who is also a Kofoworola Abeni Pratt Fellow, wrote a blog about who inspires her, and why Black History Month isn’t enough. She said:

We were completely ignored, eliminated and overlooked for so long – it saddens me that people are still surprised when they find out that a Black person helped invent GPS, refrigeration, air conditioning, an element for the light bulb and traffic lights. 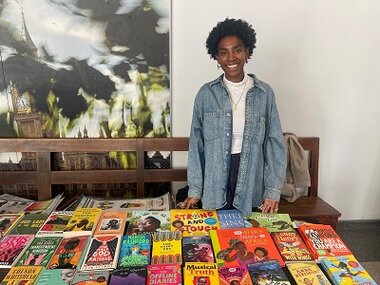 Toneé Mykoo, who works for Round Table Books, an independent bookstore that features only books written by diverse and underrepresented authors, swapped her Brixton shop for a modestly-sized table at Royal Brompton, Harefield, Guy’s Hospital, St Thomas’ Hospital, and Evelina London during the month. Full story here. 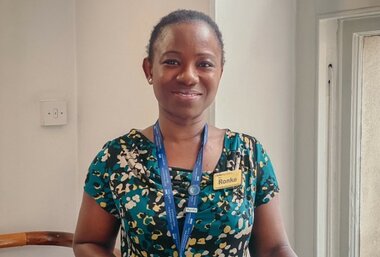 Ronke Ajidahun, haemophilia clinical nurse specialist at St Thomas’ Hospital, says change is necessary, and wrote a blog about who inspires her, and why she always encourages her children to be ‘bold and beautiful’. She said:

Black people are here and we have been for a very long time. We are part of the story and we’ve contributed in various means to the growth and development of this country. We are making an impact even though most of the time this doesn’t get reported or acknowledged as much as we would have hoped. 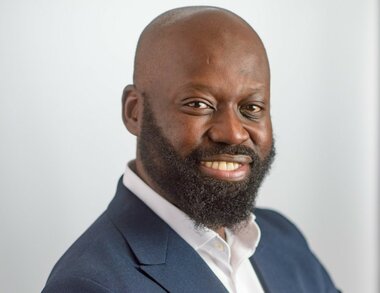 Deputy Chief Nurse Jay Dungeni wrote a blog post titled ‘I'm still conflicted’, where he discussed his ambition to improve the often still difficult career journeys for so many Black people. He said:

I do not want to be reeled out as a success story when there are still so many experiences of racist discrimination, yet I want to play my part in this struggle, even if I have to do it from the front. 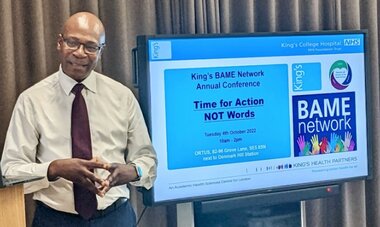 The Trust held a conference where its racial and cultural diversity network reflected on its past two years' work and future plans.

Guest speakers included Helen Hayes, MP for Dulwich and West Norwood, who spoke about the importance of the cultural diversity work under way at the hospital. 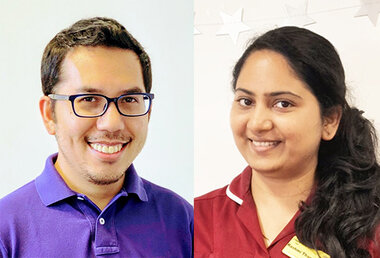 Data shows that healthcare professionals have the highest burnout rate of all the professions, and nurses came on top of that list. Hence, I always wanted my colleagues to feel supported, especially in situations that matter. Making sure that support is available at any time and concerns are raised and actioned in a timely manner, can make all the difference to our working lives.

I'm so grateful for this award and the encouragement and recognition it brings. I feel blessed, and I really value and respect this honour. This achievement is a lifetime inspiration for me and I will always cherish this award. 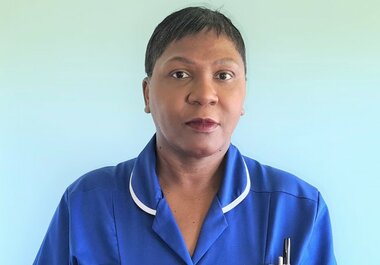 Celebrating BHM is very liberating. It is an opportunity to recognise the hard work and contributions of Black people in the NHS as well as the economy. 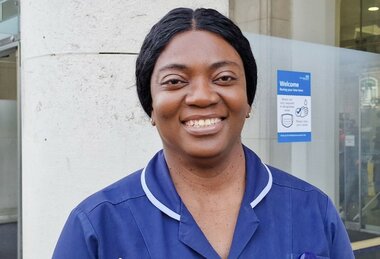 Maureen, Ward Leader at King's College Hospital, shared what BHM means to her:

BHM for me is about celebrating and embracing the diversity and culture of our staff and also remembering those that have contributed to the NHS.

We are committed to reducing the disparities faced by people from Black, Asian and Multi-Ethnic communities, who form a significant proportion of the people using our local services.

We recognise that fulfilling this ambition requires transformational change from within our organisation and we must embed anti-racism in all that we do to ensure better experiences for our staff, service users and people we serve. This anti-racism statement sets out how we will put this into action. 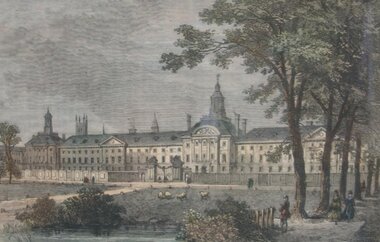 The Trust’s history through a lens series focused on Black lives at the early modern Bethlem. Between 1676 and 1815 the Moorfields site treated anybody who needed help regardless of creed or colour. Read the full story here.

Mike Franklin, Non-Executive Director at the Trust and joint lead of Equality and Inclusion at NHS England, recorded a video to share what anti-racism means to him. He said:

I think anybody who’s working on anti-racism has to be able to identify it, say what it is, call it out and then act to eliminate it. Anti-racism for me is about challenging racism, changing things for the better, and being honest about what we are. 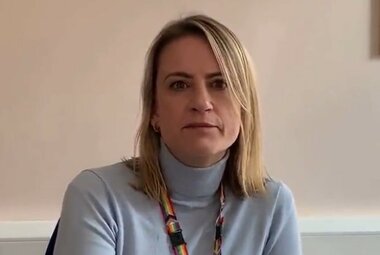 Charlotte Hudson, Director of Corporate Affairs, also recorded a short video for the Trust. She said:

Anti-racism, to me, is exactly what the theme of this month is, which is action, not words. It’s all very well for me to talk the talk, but walking the walk is what it’s all about. And so it’s about proactivity. There are things that I can’t see, and it’s because I’m not looking hard enough. 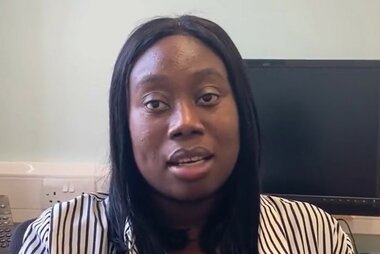 Lily Kpodo, Service User Research Ambassador at the Trust, discussed disparities Black service users face in research, the Trust’s anti-racism strategy, and her experiences as a Black woman in research. She said:

Sometimes I’ve noticed that certain communities, particularly racially minoritised communities, are not always offered opportunities to be involved in research studies, and it’s also highlighting that discrimination is unfortunately still playing a part when it comes to research studies.