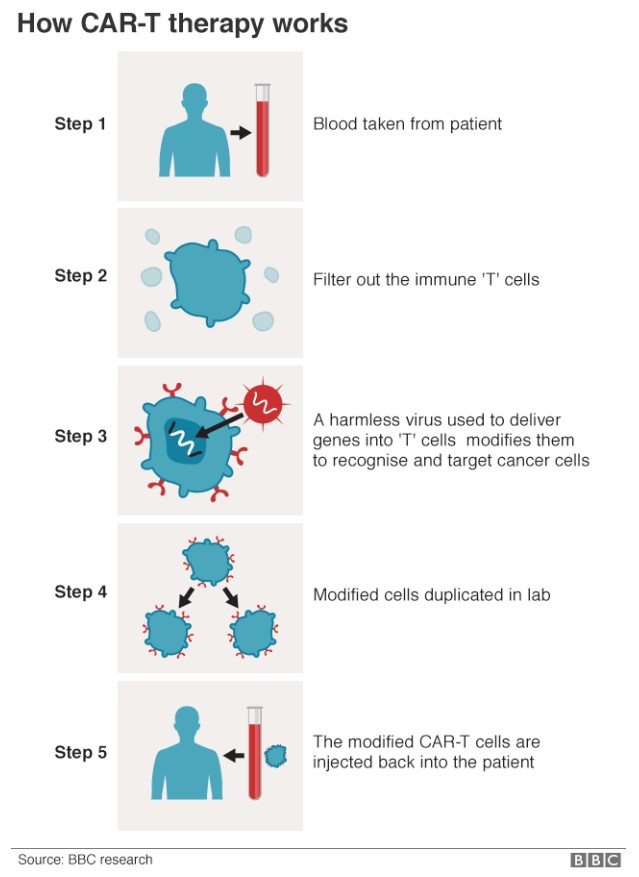 King’s College Hospital has become the first hospital in the UK to use the newly approved CAR T (chimeric antigen receptor T-cell) therapy to treat adult patients with lymphoma.

CAR T therapy is a complex immunotherapy that is personally developed for each individual patient. It involves harvesting T cells – the immune cells that recognise and kill viruses – from the patient, reprogramming them to recognise cancer cells, and infusing them back into the patient so they attack the cancer.

Currently, CAR T therapy is being used on selected patients at King’s College Hospital with a recurrence of lymphoma – a cancer that begins in the infection-fighting cells of the immune system. These cells are found in the lymph nodes, spleen, thymus, bone marrow, and other parts of the body.

King’s College Hospital has long been at the forefront of pioneering new treatments for blood conditions so we are delighted to be offering CAR T therapy. It has been shown in trials to cure some patients, even those with advanced cancers, when other treatments have failed.

The treatment is effective in around 40-50% of cases, including patients who did not respond well to chemotherapy, but has a unique set of side effects, including neurotoxicity, in the short-term.

Patients who receive the treatment can experience a range of unpleasant side effects from high fever; vomiting; and diarrhoea to confusion; aphasia (difficulty understanding or speaking); and loss of consciousness.

King’s College Hospital has been at the forefront of this therapy by bringing together researchers and clinicians as part of King’s Health Partners, turning the latest research into pioneering new treatments for patients.

As a result of this partnership, all CAR T patients are also screened for anxiety and depression as part of their treatment. Any patient showing symptoms will receive mental health support to cope with the difficult effects of the treatment. This makes King’s College Hospital unique as no other UK hospital offering CAR T therapy joins up physical and mental health treatment in this way. 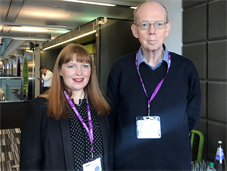 One of the first patients to receive the treatment was 62-year-old Mike Simpson, a solicitor from Durham. The married father-of-two was diagnosed with stage 4a Diffuse Large B-Cell Lymphoma, a fast-growing form of blood cancer, in 2015 after discovering a lump in his neck. He underwent chemotherapy and radiotherapy at his local hospital and went into remission. Ten months later, he relapsed and was treated again. After going into remission for a second time, the cancer returned.

In October 2018, I began experiencing back pain, stomach discomfort and severe vomiting so I went for more tests and was given the news the cancer was back. Dr Wendy Osborne and colleagues at the Northern Centre For Cancer Care (NCCC), Freeman Hospital Newcastle, explained CAR T therapy, which looked very promising so when I was given the opportunity to have the therapy at King’s I jumped at it, and I am very grateful the team at NCCC put me forward.

Mike came to King’s College Hospital in late 2018 for pre-assessment and had his cells harvested in early January 2019. While they were sent to the USA for modification, Mike was given ‘holding’ treatment to ensure his lymphoma remained under control as this process takes four weeks. Once the CAR T cells were manufactured, he was given conditioning chemotherapy to prepare for the infusion of modified T cells, which he received in February.

The team at King’s explained all about the treatment and possible side effects. Despite this, it still came as a big shock to me and my family when I became unwell a few days after the infusion. It was no walk in the park. I spent almost a week in intensive care and when I was well enough to be moved back to the ward I had to re-learn basic tasks such as climbing stairs. I was fortunate to have the support of my wife and children, who had to watch me go through the changes hoping all the time they would be temporary.

Despite the initial adverse reaction to the therapy, Mike has responded well to the treatment and is working towards remission. He is back at home, spending time with his young grandchildren and regaining his strength. Mike is hopeful for the future, including a return to work, but recognises how lucky he is.

I’m incredibly grateful for being given the opportunity to have this therapy as I know it’s a costly, one-time treatment. I describe it as my L’Oreal treatment… because I’m worth it,

In cases such as Mike`s, CAR T therapy is a last resort when other treatments have failed. Although it does not work for everyone, from what we have observed in clinical trials this type of personalised medicine offers real hope for lymphoma patients who otherwise would have limited options. We are very hopeful this treatment will be a game-changer for our patients.

The NHS is providing CAR T therapies for children and young people with B cell acute lymphoblastic leukaemia, and adults with diffuse large B-cell lymphoma and primary mediastinal B-cell lymphoma in England.

CAR-T shows huge promise and it is fantastic to see that patients in the NHS are among the first in the world to benefit. The start of this treatment marks the beginning of a new era of personalised medicine and forms part of the upgrade in cancer services which are set out in the NHS Long Term Plan.

A panel of expert clinicians decides which patients are eligible for treatment.