A new gene therapy for haemophilia A has been tested at Guy’s and St Thomas’ NHS Foundation Trust. 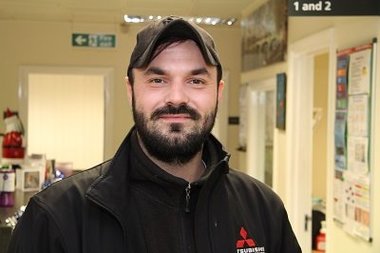 The four-year trial has shown that patients with the rare condition continue to show a positive and sustained response to gene therapy. Shaun Busby [pictured right] is one of the first patients to take part in the phase 1 trial, first receiving treatment at Guy’s and St Thomas’ in February 2016.

Haemophilia A is a genetic disorder that affects the blood's ability to clot because patients don’t produce a key clotting protein called Factor 8. This leads to severe pain from joint bleeds, bruising and prolonged bleeding from wounds. There are more than 2,000 severe haemophilia A patients in the UK.

Gene therapy has existed for around 15 years for haemophilia B, although it has proved more difficult using it to treat haemophilia A. For this new treatment, the missing Factor 8 gene is inserted into a virus which is used as a vehicle to carry it after being injected into the patient’s blood. It then circulates to the patient’s liver to start producing the missing Factor 8. This has been made possible by truncating the Factor 8 gene so that only the much smaller active part is retained and can fit into the virus.

Our patient’s life has been transformed remarkably since receiving a single infusion of gene therapy in February 2016. He is no longer dependent on three times a week injections that he was previously requiring, and needs Factor 8 injections only occasionally.

Shaun Busby, an engineer from Tooting in south London, spoke about their experience:

Living with it is very difficult because you are forever in and out of hospital clinics and appointments.

I feel more alive after the trial and it has had a huge impact on my quality of life… I have to pinch myself all the time – four years ago I was struggling – having bleeds and worrying about pain medication and Factor 8 injections.

This new gene therapy for haemophilia A has been tested at several hospitals in the UK, including Guy’s and St Thomas’ NHS Foundation Trust, and the latest results show that the 13 patients in the study have achieved significant increase in Factor 8 levels, such that they do not require regular Factor 8 injections.

Guy’s and St Thomas’ NHS Foundation Trust is currently conducting further tests on safety and effectiveness with a larger pool of participants. The pharmaceutical firm pioneering the treatment is currently seeking regulatory approval from the European Medicines Agency.