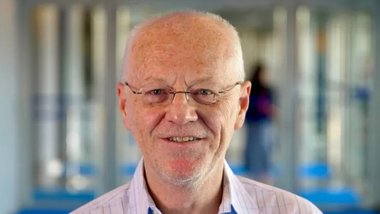 Professor Goadsby [pictured right], alongside Prof Lars Edvinsson (Sweden), Prof Michael Moskowitz (USA), and Prof Jes Olesen (Denmark), have been recognised with the world’s most prestigious award for brain research for their discovery of a biological mechanism that triggers a migraine attack 40 years ago which has since led to powerful new treatments for patients.

Their work enabled clinically effective classification of the different types of migraine disorder and led to the development of monoclonal antibodies (MAbs) as a preventative treatment. The development of these drugs opened a new era in migraine research and therapy. Although they do not cure migraine, they markedly improve the quality of life for those who suffer from them.

The Brain Prize is the world’s largest prize for brain research and is awarded each year by the Lundbeck Foundation, one of the largest commercial foundations in Denmark. The award is worth £1.1 million and is given to neuroscientists who have had a ground-breaking impact in the field.

Prof Goadsby is an internationally renowned neurologist in the field of headache and migraine who joined the department of Basic & Clinical Neuroscience at IoPPN in 2013. He directs the National Institute for Health Research-Wellcome Trust King’s Clinical Research Facility, is Pain Research theme lead at the NIHR Maudsley Biomedical Research Centre (BRC) and acts as an Honorary Consultant Neurologist at King’s College Hospital NHS Foundation Trust and Great Ormond Street Hospital for Children NHS Foundation Trust. On winning this award, Prof Peter Goadsby said:

It is an enormous privilege to receive the Brain Prize; really a prize for all the people who have suffered for so long with headache disorders, and for all the excellent scientists who have made an important contribution to this field.

It is an overdue recognition of the ‘Cinderella’ problem of migraine. Cinderella has arrived at the ball as a welcome guest - and got the glass slipper!

I feel privileged to work in medicine with patients’ headache disorders, and their families, to make some small differences and help the incredibly brave patients I see do just a little better.

Our congratulations to Peter on this outstanding achievement. Peter’s work on migraine shows the huge potential of experimental medicine in neuroscience – where discoveries from the laboratory are translated for patient benefit.

These benefits for patients are achieved through our infrastructure at King’s, including the NIHR CRF Peter directs and the NIHR Maudsley BRC where he leads the Pain theme.

Prof Richard Morris, chair of the prize’s selection committee, explains the reasoning behind the award:

Migraine is one of the most common and disabling neurological conditions affecting humans. The work of the four recipients contributed to the clinically effective classification of the various types of this disorder, and then to unravelling the key mechanisms that cause it. This understanding led to the development of a novel therapy and has opened windows into future ones.

Their work on migraine is a remarkable example of bedside-to-bench-to-bedside research that has yielded tangible clinical benefit.

The Brain Prize is awarded at a ceremony in Copenhagen, Denmark presided over by His Royal Highness, The Crown Prince of Denmark. This year it will take place on 25 October.