Up! Up! Weight management service launched

KHP is supporting a new programme specifically tailored for people of Black, African, and Caribbean heritage. 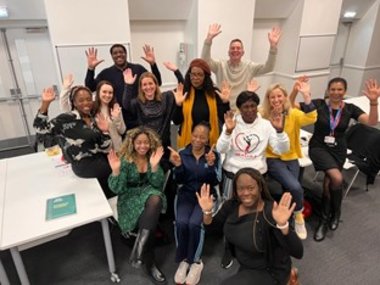 A new Tier 2 weight management programme specifically tailored for people of Black, African, and Caribbean heritage in Lewisham has been launched.

Up! Up! Living lighter the African and Caribbean way, is delivered over 12 weeks and focuses on physical activity, nutrition coaching, and cooking workshops.

Up! Up! Is an energised, nonstandard programme for people of Black, Caribbean or African heritage who really want to change and improve their life for the better.

It’s about getting moving and being more in tune with your health, your wellbeing, your diet.

The programme is funded by Lewisham Public Health, which commissioned KCL and Guy's and St Thomas' to work together with London Borough of Lewisham health commissioners and residents to co-produce a weight management service tailored for the borough’s Black-African and Black-Caribbean communities.

Additionally, feedback from communities has indicated a perception that existing services are not ‘for them’, further highlighting the need for a tailored approach.

KCL and Guy's and St Thomas', as members of KHP, have a proven collaborative track record in developing and delivering tailored health interventions, including HEAL-D, a diabetes self-management education and support programme for African and Caribbean communities.

The weight management programme is structured as follows:

Liked this article? Find out how KHP DEO is improving health and wellbeing for people living with diabetes, obesity and endocrine disorders across London, south east England and beyond.