Transgender Awareness Week raises the visibility of transgender people and brings attention to the issues they often face. It is an opportunity to share stories and experiences ahead of Transgender Day of Remembrance (TDOR). 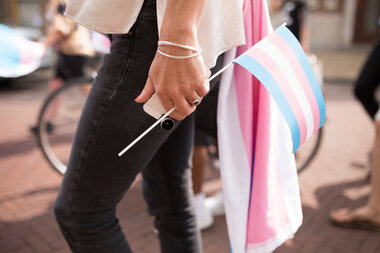 TDOR is an annual observance on November 20 that honours the memory of the transgender people whose lives were lost in acts of anti-transgender violence that year.

May be used when a person has transitioned but has decided not to apply for a GRC.

Someone whose gender identity is the same as the sex they were assigned at birth. Non-trans is also used by some people.

When a person first tells someone/others about their orientation and/or gender identity.

Often expressed in terms of masculinity and femininity, gender is largely culturally determined and is assumed from the sex assigned at birth.

Used to describe when a person experiences discomfort or distress because there is a mismatch between their sex assigned at birth and their gender identity.

This is also the clinical diagnosis for someone who doesn’t feel comfortable with the sex they were assigned at birth.

A person’s innate sense of their own gender, whether male, female or something else (see ‘non-binary’ below), which may or may not correspond to the sex assigned at birth.

Another way of describing a person’s transition. To undergo gender reassignment usually means to undergo some sort of medical intervention, but it can also mean changing names, pronouns, dressing differently and living in their self-identified gender.

This enables trans people to be legally recognised in their affirmed gender and to be issued with a new birth certificate. Not all trans people will apply for a GRC and you currently must be over 18 to apply.

A GRC is not required to legally change your gender on other documents such as your passport. It is never appropriate to ask a trans person for a GRC and regarded as unlawful because it breaches their right to privacy.

Intersex people may identify as male, female, or non-binary. Intersex people are sometimes included in LGBTQ+ activism, communities, and policy, however this inclusion is not welcomed by all intersex people.

A person’s ‘legal’ sex is determined by their sex on their birth certificate.

An umbrella expression and an acronym for lesbian, gay, bisexual and trans (plus other related identities). Occasionally, the acronym is stated as “LGBTQIA” with“Q” representing queer and questioning, “I” for intersex, and “A” for asexual and allies.

To refer to (someone, especially a trans person) using a word, especially a pronoun or form of address, that does not correctly reflect the gender with which they identify.

An umbrella term for people whose gender identity doesn’t sit comfortably with ‘man’ or ‘woman’. Non-binary identities are varied and can include people who identify with some aspects of binary identities, while others reject them entirely.

When a lesbian, gay, bi or trans person’s sexual orientation or gender identity is disclosed to someone else without their consent.

If someone is regarded, at a glance, to be a cisgender man or cisgender woman.

Cisgender refers to someone whose gender identity matches the sex they were ‘assigned’ at birth. This might include physical gender cues (hair or clothing) and/or behaviour which is historically or culturally associated with a particular gender.

Person with a trans history

Someone who identifies as male or female or a man or woman but was assigned the opposite sex at birth. This is increasingly used by people to acknowledge a trans past.

Words we use to refer to people’s gender in conversation - for example, ‘he’ or ‘she’. Some people may prefer others to refer to them in gender neutral language and use pronouns such as they/them and ze/zir.

Queer is a term used by those wanting to reject specific labels of romantic orientation, sexual orientation and/or gender identity. It can also be a way of rejecting the perceived norms of the LGBT+ community (racism, sizeism, ableism etc). Although some LGBT+ people view the word as a slur, it was reclaimed in the late 80s by the queer community who have embraced it.

Assigned to a person based on primary sex characteristics (genitalia) and reproductive functions. Sometimes the terms ‘sex’ and ‘gender’ are interchanged to mean ‘male’ or ‘female’.

An umbrella term to describe people whose gender is not the same as, or does not sit comfortably with, the sex they were assigned at birth.

A term used to describe someone who is assigned female at birth but identifies and lives as a man. This may be shortened to trans man, or FTM, an abbreviation for female-to-male.

A term used to describe someone who is assigned male at birth but identifies and lives as a woman. This may be shortened to trans woman, or MTF, an abbreviation for male-to-female.

The steps a trans person may take to live in the gender with which they identify. Each person’s transition will involve different things. For some this involves medical intervention, such as hormone therapy and surgeries, but not all trans people want or are able to have this.

The fear or dislike of someone based on the fact they are trans, including denying their gender identity or refusing to accept it. Transphobia may be targeted at people who are, or who are perceived to be, trans.

This was used in the past as a more medical term (similarly to homosexual) to refer to someone whose gender is not the same as, or does not sit comfortably with, the sex they were assigned at birth.

This term is still used by some although many people prefer the term trans or transgender.

Check your organisation’s intranet for more information about specific employee policies and resources.

King’s College Hospital NHS Foundation Trust launched the first sexual health service in south London for trans people in April 2019. In partnership with cliniQ, the service offers a range of health and wellbeing initiatives to meet the needs of trans people. Find out more about the service here.

Gendered Intelligence, established in 2008, is a registered charity that exists to increase understandings of gender diversity and improve trans people's quality of life. They produce a range of resources for professionals and families.