Shining a light on menopause

What is menopause? What are the symptoms and how do you treat them? Does HRT (hormone replacement therapy) cause breast cancer? And where can people get support? 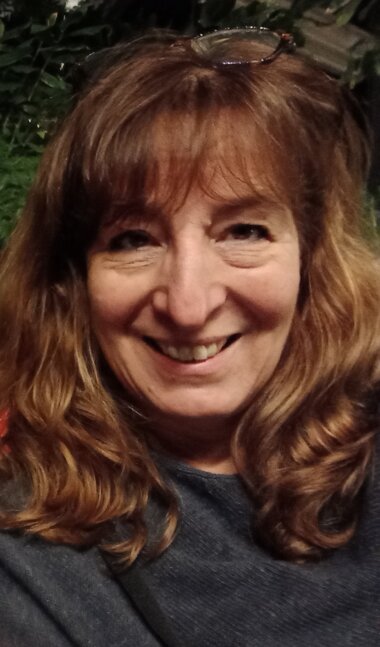 To answer these questions King’s Health Partners sat down with expert Debra Holloway [pictured], Nurse Consultant Gynaecology at Guy’s and St Thomas’ NHS FT, for a wide-ranging interview about menopause.

Menopause is a reporductive phase when the periods stop. We’ve got different phases within that. First is perimenopause, which is the time leading up to when the last menstrual period is, when the hormones fluctuate, the periods become irregular and you may well get menopausal symptoms. Then afterwards you get post menopause, which is when you have not had a period for a year and are considered to be post-menopausal.

This usually happens around the age of 51 or 52. However, the transition for the perimenopause starts in the 40s, and menopausal symptoms can go on for on average seven years post the last menstrual period. For some people it can last up to 20 years.

And then we have premature ovarian insufficiency, which is when the menopause happens under the age of 40. This is a different category of menopause and something that we really need to focus on in terms of longer-term health benefits and supporting those people.

What are the common symptoms and side effects?

The most common symptoms that everyone knows about will be hot flushes and night sweats, which come due to your body perceiving you to be too hot, so it starts a cooling down process.

And there are psychological changes. These can be mood changes, low mood or menopause-related low mood, and anxiety.

You can feel indecisive, get brain fog, confused, and depressed, and some of those are connected to not sleeping very well.

And some of these are linked in with hormonal changes. You get changes in the vagina and the bladder because they've both got hormone oestrogen receptors in them. You get dry vaginal tissues, they become thinner tissues and it can hurt when you have sex. You can have decreased sex drive in the menopause as well, related to that and also related to the hormonal changes.

You can have problems with your bladder, feeling that you need to have a wee more often. You have changes with the periods and then we have a whole other range of differences with skin and hair, they become drier, and dry eyes, weight gain, headaches and joint pain.

How is menopause treated?

Menopause isn't an illness and doesn't have to be treated, it's the symptoms and how it affects people's quality of life.

Some people don't have any treatment at all, they will just use the time the periods stop and feel free from having had heavy periods for years. They don't have many symptoms, maybe a few hot flushes and night sweats, and don't need any treatment.

Others will look at diet and lifestyle changes, as we know that there are triggers for some of the symptoms. Alcohol being one of them, smoking being another. And some people will think about their diet, their lifestyle, and manage it more holistically.

Others will go maybe to a health shop or to a chemist and look at taking herbal preparations, like black cohosh or red clover. Or people may go for other therapies, like cognitive behaviour therapy, acupuncture, and then there is hormone replacement therapy.

This is replacing the hormones that you would naturally make in the menstrual cycle, so oestrogen and progestogen given either as a patch, tablet, or a gel. If you can't take hormones because maybe you've got a hormone-related cancer, there are some alternative medications that we can prescribe for the treatments of hot flushes and night sweats.

So there are a whole variety of different ways of treating the symptoms of menopause and no one size fits all. It's very individual as to one, whether it needs treating, or two, whether you want to treat it.

The only group of people we do like to treat because of the long-term risks on bones and heart, are those that have a menopause under the age of 40. And then additionally, for some people who have just vaginal symptoms, we do have vaginal oestrogen that people can use as well.

What are the common misconceptions about menopause?

‘Too young to have menopause’

Equally, people are put into menopause by some of the treatments for cancer, and again, they can be young as well. So you're never too young to be menopausal - if you think you've got the symptoms, don't be fobbed off by someone saying you're too young.

Do you need a blood test to diagnose menopause?

The answer is no, unless you're under the age of 40. Otherwise, we do blood tests that fluctuate wildly. You've got hot flushes, night sweats, and not had a period of six weeks, then you do a blood test and it comes back normal, but you've obviously got menopausal symptoms.

So we don't suggest using blood tests generally to diagnose because they give either false reassurance or they can be used for someone to tell you that it's normal and you don't need to have any treatment, so they're not particularly useful.

‘You have to stop taking HRT after five years’

Again, that's wrong. You can take HRT to manage your symptoms for as long as you need to, and we suggest having a yearly review if you are on HRT, looking at your symptoms, looking at where you are in the menopause, and also looking at if anything else has changed in your medical care.

If you are happy on HRT, then you can carry on taking HRT for as long as you need to, having a yearly review and then assessing the risks and benefits as you go.

‘You have to have stopped your periods completely before you use HRT, so be post-menopausal’

And again, this is wrong. There is HRT around called sequential HRT, which is giving you oestrogen all the time and then progestogen on top for 12 to 14 days a month. This mimics the menstrual cycle and is used for when people are still having periods, even if they're irregular periods.

‘HRT delays the menopause and then when you stop taking it, all the symptoms come back’

It doesn't delay anything. If you took HRT for five years and you still had symptoms when you stopped it after five years, you would have been having those symptoms anyway, it doesn't push the symptoms along.

HRT does give you an increased risk of breast cancer if using a combined treatment for longer than five years over the age of 50.

And if your body mass index is over 30, then you have an additional 23 breast cancer cases related to the weight. You can negate some of that by doing two-and-a-half hours of moderate exercise a week, which gives you less breast cancer. So breast cancer risks are all relative, and need to be looked at in the context of the individual person.

‘Natural methods are safer, such as herbs’

In fact, we have less evidence and less rigorous trials around herbs because they're sold as a food supplement rather than being sold as a medication. They do work for some people and NICE (National Institute for Health and Care Excellence) has got their menopause guideline and they do recommend red clover and black cohosh in there. These are the two that had the most evidence for sorting out menopausal hot flushes and night sweats.

It means you do have to treat them if you're going to use them to treat menopausal symptoms as a medication, and go and seek help from the pharmacist or professional to look at your other medications to make sure there are no interactions.

How can staff best support themselves and others during menopause.

I think menopause cafés are a great idea for people to get together and talk about their symptoms, or join online support groups – there are many out there.

So I think speaking, talking to people and trying not to be overwhelmed by it as well - it is a life stage. It's important to get all the information that you can about it so that you recognise what's happening, and help others help you.

And final question, what are good sources of support?

My go-to support for people who are under the age of 40 would be the Daisy Network, which is a specialist website, and they've got buddy support for those who have menopause early.

Otherwise I would use Women's Health Concern, which has a good menopause hub, with lots of fact sheets. It's the patient side of the British Menopause Society, so it's written by clinicians. They have a lot of fact sheets about HRT, about breast cancer and menopause, hair loss, insomnia, vaginal problems and things.

Menopause Matters is another website. It has ads on it but is clinician run, so the content isn't paid for by the ads, and it’s another good source of support. These would be the three that I would go to.

Liked this article? Find out how KHP Women and Children’s Health is improving the health and wellbeing of women and children through research, education and care.