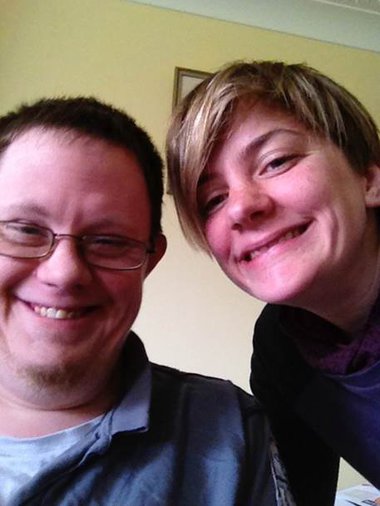 Emily Handley is a senior clinical psychologist in the mental health and learning disabilities service at South London and Maudsley NHS Foundation Trust.  She describes how a joined up focus on the mental and physical health needs of her brother Richard could have prevented his tragic death from unmanaged constipation. This piece first appeared as the foreword to the Public Health England report ‘Making reasonable adjustments for people with learning disabilities in the management of constipation’ in August 2016.

My brother Richard had Down’s syndrome, psychosis and a mischievous sense of humour. He loved theme parks, theatre classes, watching ‘Mr Bean’ and tickling people’s toes! Richard also had constipation from birth. There’s nothing glamorous about ‘poo’ but my parents understood Richard’s needs and did their best to make toileting fun! Laughter could be heard from the bathroom every night, as my parents helped Richard to relax and encouraged bowel movements.

When Richard left home, assessment reports by professionals said very clearly that his constipation would always need close monitoring and support and that constipation should always be considered as a potential cause, when his mental health deteriorated. Somehow, this knowledge was lost over the years.

Richard sadly died very suddenly in 2012 as a result of unmanaged constipation. He was only 33 years old. Over 10kg of faeces was removed from Richard’s bowels before he died and his bowel was 18cm diameter at post-mortem. His psychiatrist and GP had both seen him that week but did not recognise the extent of faecal impaction. Richard’s withdrawal and distress were attributed to his mental health and a mental health admission was arranged, when he actually needed urgent medical attention.

When Richard was finally admitted to hospital, his assessment and treatment were inadequate, the faecal impaction persisted and he aspirated gastric contents and died. It is difficult and harrowing to imagine how much pain and discomfort Richard must have been in, for quite some time.

Losing Richard has devastated his family, leaving a void that can never be filled. Our grief has been compounded by the extent to which we have had to fight for thorough investigations and sufficient recognition of the need to improve practice in this area. Shouldn’t the death of an otherwise healthy 33-year-old with constipation raise serious alarm bells?

Another lady with learning disabilities died in Suffolk with constipation six months after Richard. I will always wonder whether a timely investigation and service improvements after Richard’s death could have saved her.

The supports that Richard needed to manage his bowel care were actually quite basic. He was surrounded by support workers and professionals but his needs weren’t met and he died unexpectedly with preventable and treatable symptoms. His constipation wasn’t even mentioned in his hospital passport or Social Services' Community Care Assessment! Families trust professionals and care providers to meet their family members’ care needs, yet Richard’s support workers had stopped using bowel charts and involving the district nurse, without letting us know.

Slight changes to practice by staff in various roles would have ensured good bowel management. It is hard to understand why this didn’t happen but I suspect that it reflects a combination of ‘poo aversion’ (it isn’t glamorous!), diffused responsibility towards physical health amongst professionals, diagnostic overshadowing, health inequalities and institutional discrimination, all of which are experienced too often by people with learning disabilities. Everybody thought somebody else would hold Richard’s constipation in mind and, sadly, nobody did. The Serious Case Review report highlights how Richard’s care provider, GP, psychiatrist, social workers and hospital staff could all have done more to help Richard.

I hope that this report and Richard’s story inspire support workers and professionals to adjust their practice, to speak up and advocate when others need to do the same and to implement timely practice changes when service limitations become apparent. Working proactively, flexibly and responsively with the ‘whole person’ should help to prevent further tragedies.